The Kolkata Knight Riders put up a massive score of 194 courtesy a measured 81 by Rana and a quickfire 64 by Narine. Varun Chakravarthy spun a web around the DC’s middle order as he registered his career best figures of 5-20.

Shreyas Iyer won the toss and elected to field first. Shubhman Gill was looking promising as he struck two fine shots against Deshpande in the first over. He got out just like that in the next over as his cut shot found Axar Patel. Rahul Tripathi, playing at number three as Nitish Rana was opening today, was just settling in before Nortje disturbed his timber in the 6th over. DK came and went without troubling the scorers too much as KKR found themselves in a spot of bother.

At 44-3 at the end of eight overs, Morgan had sent Narine ahead of him and that looked like a strange decision at that time. In hindsight, it proved to be a masterstroke as he smashed the Delhi bowlers all around the park. It all started with a six and four against Ashwin. The very next over, he smoked a couple of fours against the under pressure Deshpande. Nitish Rana, who held one end up from the very start, then leveraged the momentum created by Narine and started expressing himself too. With boundaries against Stoinis and Ashwin, he was looking set for a big one as he brought up his fifty off 35 balls. Narine continued the carnage against Ashwin as the Indian numero uno test spinner went for 45 in his three overs. Narine got out though against Rabada, not before helping himself to a 32 ball 64, and effectively changing his team’s fortunes in the tournament. 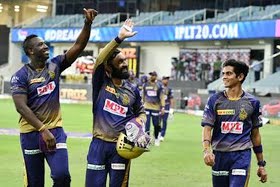 DC were in desperate need of a quick start, but exactly the opposite happened as Rahane, who was playing instead of Shaw, was pinned plumb in front first ball by Cummins. Dhawan, riding on two consecutive centuries, would have hoped for another meaningful contribution but was castled at the hands of Cummins, whose figures at the end of three overs read 2-0-5-2. Iyer and Pant showed some intent to make use of the powerplay, and Delhi reached 36-2 at the end of the fielding restrictions.

Even though the pair successfully avoided any further loss of wickets, runs weren’t coming in accordance with the required rate. Only two boundaries were scored from overs 5-10 as the required rate went to the north of 13 runs per over. Iyer showed some intent by slashing two fours against Ferguson, but Pant was caught in the deep against Chakravarthy to trigger a collapse. Hetmyer, after smashing a six, holed out to Tripathi at long on. Skipper Iyer too followed suit the very next ball as he fell for a decent knock of 47(38). Stoinis and Axar Patel perished in the 16th over to Chakravarthy as the “mystery” spinner of KKR picked up the first fifer of this year’s IPL.

With 83 required from the last four overs, it was never going to happen for Delhi, though Ashwin and Rabada helped themselves to a few boundaries. Cummins finished with 3 wickets and Ferguson also picked one as KKR won the match comfortably by 59 runs.