England won the toss and put Sri Lankans into bat

James Anderson marked his England return with the wicket of debutant Lahiru Thirimanne, leaving Sri Lanka on 23-1 when rain forced the teams to take an early lunch on day one of the third and final Test at the Rose Bowl on Thursday.

James Anderson marked his England return with the wicket of debutant Lahiru Thirimanne, leaving Sri Lanka on 23-1 when rain forced the teams to take an early lunch on day one of the third and final Test at the Rose Bowl on Thursday. 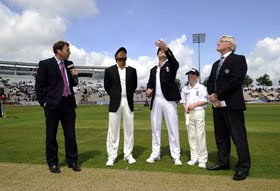 Anderson, who is back in the team after a side strain, looked the sharpest of England's pace bowlers in a truncated morning session and found the edge of the 21-year-old left-hander, who departed for 10 when England captain Andrew Strauss took a sharp catch at slip.

Fellow opener Tharanga Paranavitana was still there on 11, although he survived an umpire review in the fifth over as England thought he had edged Anderson to wicketkeeper Matthew Prior. Kumar Sangakkara (0 not out), back captaining the tourists in place of the injured Tillakaratne Dilshan, faced two balls before a heavy downpour forced the sides off.

Rain had delayed the start of play by 75 minutes before Strauss won the toss and put the Sri Lankans into bat, who are 1-0 down in the series, into bat. There was only 63 minutes of action in the morning session and more rain is forecast for the rest of the day.

Thirimanne struck a century in a warmup match against Essex last week to virtually guarantee his place in the team in place of Dilshan and he looked solid on debut, fending off some fierce deliveries from Anderson.

Paranavitana had more problems. He needed treatment in the fourth over after he was rapped on the left hand by a rising delivery by Broad, who was otherwise wayward after being retained in the team at the expense of the dropped Steven Finn to accommodate Anderson.

The following over saw Paranavitana escape the review following a slanting delivery by Anderson and it took the opener three more overs to grab his — and Sri Lanka's — first boundary, slashing a square cut to the boundary off Broad.

Paranavitana was also hit on the right hip by Tremlett, who came on as first replacement for the struggling Broad.

Thisara Perera came in for fellow paceman Farveez Maharoof in the other change made by Sri Lanka for a Test it needs to win to save the series.

The Rose Bowl was hosting its first Test match, becoming the 10th test venue in England and the 105th worldwide.