An industrious Rahul Dravid once again bricked up to become 'The Wall' and grew an inch taller with his 32nd Test century on Wednesday – this time in the Caribbean – that put India in sight of another away Test victory.

An industrious Rahul Dravid once again bricked up to become 'The Wall' and grew an inch taller with his 32nd Test century on Wednesday – this time in the Caribbean – that put India in sight of another away Test victory. 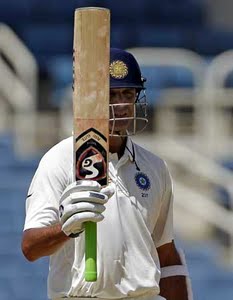 Once again, on foreign soil, India found that the services of Dravid were indispensable in Test cricket. More so when Sachin Tendulkar is not part of the setup and VVS Laxman still acclimatizing to slow, low West Indies tracks.

The 112 runs Dravid scored in the second innings of his 151st Test came when the next highest scorer was No. 10 Amit Mishra (28) – defining the enormity of task at his hands.

But it isn't only about the runs Dravid scored, but also the way he first guided Virat Kohli through to stumps on day two and then controlled Suresh Raina's aggression the next day following the early loss of Kohli's wicket.

And then again when India wobbled in the middle of their second innings on Wednesday, Dravid's calming influence on Mishra resulted in a 56-run partnership for the ninth wicket. That took India's lead past 300, courtesy Dravid's century that came off 274 balls and included 10 four and one six on a surprisingly turning Sabina Park track.

So 'The Wall', besides being inconquerable for its opponents, is also a leaning source for Indian youngsters – who can bank on its endurance and strength of character.

At a time when many critics are after Dravid's head, the 38-year-old batting technician has surely knocked them over with his century and must be muttering, "Elvis has not left the building yet!"