Sri Lanka captain Tillakaratne Dilshan is almost certain to miss the third Test against England starting next week because of a fracture to his right thumb.

Sri Lanka captain Tillakaratne Dilshan is almost certain to miss the third Test against England starting next week because of a fracture to his right thumb.

After getting hurt while scoring 193 in Sri Lanka's first-innings 479 all out, Dilshan neither fielded nor opened the batting on Tuesday's final day and may have to sit out the June 16-20 Test at The Rose Bowl. 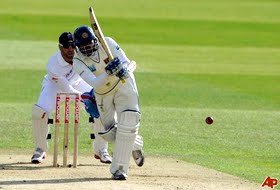 "At the moment, I believe I'm going to miss the last Test match but we'll see over the next couple of days," Dilshan said. "We have 10 days until the next Test match. The doctors advise to rest three to four weeks, but we'll see how we go."

Trailing 1-0 following the draw at Lord's and heavy first-Test defeat in Cardiff, Sri Lanka needs to win to salvage the series.

With Kumar Sangakkara failing again Tuesday and averaging 26.60 in eight innings in England — compared to an overall average of almost double that — Dilshan's injury could rob Sri Lanka of much of its batting prowess.

Dilshan was struck twice by Chris Tremlett on the thumb on his bottom hand during his innings.

He was hit when on 55 on Saturday but still managed to set a Test career best the following day before Tremlett struck him again, bending his already taped thumb back toward the wrist.

Dilshan added only one more run before falling for by far the highest score in Sri Lanka's 479 innings.

He would only have batted again Tuesday if his side had lost its nine other wickets and was trying to save the match.