A terrific partnership between Ajinkya Rahane and Stuart Binny helped Rajasthan Royals to prevail over Sunrisers Hyderabad by 4 wickets and three balls to spare in a low-scoring contest at Abu Dhabi.

A terrific partnership between Ajinkya Rahane and Stuart Binny helped Rajasthan Royals to prevail over Sunrisers Hyderabad by 4 wickets and three balls to spare in a low-scoring contest at Abu Dhabi.

On the same pitch that produced more than 400 runs in 40 overs, both Sunrisers and Rajasthan Royals struggled to score quickly.

Sunrisers asked to bat first looked solid with Shikhar Dhawan and David Warner adding 75 runs for the 2nd wicket although it wasn’t an explosive partnership. The innings took a severe beating when both the batsmen fell in succession leaving SRH at 82 for 3 in the 14th over.

Skipper Shikhar Dhawan scored 38 from 34 balls while David Warner scored 32 from 35 balls. Both the batsmen got out trying to slog medium pacer Rajat Bhatia. SRH never quite got the momentum as leggie Pravin Tambe bowled out his four overs for 23 and Bhatia came up with 2 for 22 in his four overs. Sunrisers with great difficult ended up with 133 for 6. 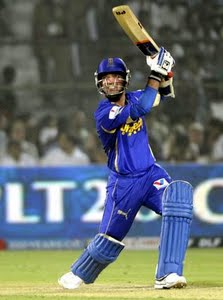 The match was SRH to lose as they reduced Rajasthan Royals to 31 for 3 in 6.2 overs with the former’s fast bowlers using the green pitch to their advantage. SRH were defied though by the crucial stand of 77 in 8.4 overs from Ajinkya Rahane and Stuary Binny. Rahane scored 59 from 53 balls with 6 fours.

Rahane’s dismissal left Rajasthan Royals with 26 from 24 balls but there was plenty of ammunition left despite the cheap dismissal of Brad Hodge after him. Stuart Binny stayed till the end with a match-winning 48 from 32 balls with 4 fours and a six while James Faulkner wrapped it up with two boundaries in as many balls in the final over.

Ajinkya Rahane was adjudged as the Man of the Match.

Toss and Teams: Rajasthan Royals have won the toss and asked Sunrisers Hyderabad to bat first in Match 4 of IPL 7 at Abu Dhabi. The four foreigners used by SRH are Finch, Warner, Sammy and Steyn. And for Rajasthan Royals, the four foreign players are Captain Shane Watson, Hodge, Faulkner and Kane Williamson.