Board of Control for Cricket in India (BCCI) President Sourav Ganguly opines that Day-Night Test has a bright future, and even went on to express

Board of Control for Cricket in India (BCCI) President Sourav Ganguly opines that Day-Night Test has a bright future, and even went on to express his desire that India should play at least one pink-ball match in every series.

After a couple of years of apprehensions, India finally played their maiden Day-Night Test against Bangladesh at Eden Gardens last month, with a sell-out crowd present to watch the spectacle. As BCCI President, Ganguly was the one who set the wheels in motion for the historic day, convincing Indian captain Virat Kohli as well as the Bangladesh Cricket Board (BCB) to be part of the event.

“I am pretty upbeat about it. I feel this is the way forward. Not every test, but at least one test in a series,” Ganguly told ‘The Week’ magazine, according to a Reuters report. The former Indian captain also revealed that other venues are now prepared to host Day-Night Tests, having seen the spectacle at Eden Gardens. 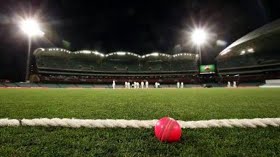 “I will share my experiences with the board and we will try and implement it in other places. After this, everyone is ready. Nobody wants to play test cricket in front of 5,000 people,” Ganguly went on to explain.

Meanwhile, speaking about the pink-ball experiment, Indian captain Kohli had said that it is good as a one-off thing, but not as a regular feature. “I think this can be a one-off thing but it should not be a regular scenario. In my opinion, this should not become the only way Test cricket is played. Because then you are losing out on that nervousness of the first session in the morning," 31-year-old Kohli had stated ahead of India’s pink-ball debut.

Team India began their journey in Day-Night Tests in emphatic fashion, getting the better of Bangladesh by an innings and 46 runs at Eden Gardens. Ishant Sharma became the first Indian to claim a five-for in pink-ball Tests while Kohli became the first batsman from the country to smash a century. Following the victory, India ended the year remaining unbeaten in Test matches.

Day-Night Tests have been started with a view to bringing crowds back to the traditional format of the game. The concept has received a mixed response from players and fans.