England won the fourth Test by 74 runs to capture the Ashes Series 3-0 with one more match to play.

Australia collapsed to a 74-run defeat in the fourth Test at Durham chasing down a target of 299 which was well in reach of them. The tourists got off to a superb start with the openers putting up 109 and England looking very jittery until Graeme Swann and Tim Bresnan produced desperate breakthroughs. Stuart Broad ran through the middle order and the lower half of the Australia who were bowled out for 224 in 68.3 overs. The match ended on the fourth day itself with play extended by one and a half hour following rain interruption.

The Aussies resumed the final session at 120 for 1 in 33 overs with David Warner looking dangerous on 57. The breakthrough for the hosts came from Swann in the 40th over with Usman Khawaja (21) given out lbw, playing outside the line to a full length drifter bowled from round the sticks. Four overs later, Tim Bresnan got one to kick away off the seam around middle to force David Warner to edge it to the keeper. Warner by then had dazzled away to 71 from 113 balls with 10 fours and a six. Just the ball after drinks, Stuart Broad secured the match for England by castling Michael Clarke with a peach of a delivery that angled in but held its line to clip the top of off. Clarke scored 21 from 27 balls and his dismissal certainly diminished the Aussie hopes with the tail looking long in the absence of the likes of Agar, Starc and Pattinson. 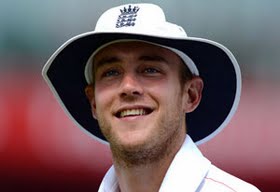 Australia were on the mat at 181 for 7 with no hopes of winning the match from this situation. Under gloomy conditions, Broad struck twice again to remove Ryan Harris (lbw to a skiddy delivery) and Lyon (cleaned up by a yorker after playing all around it). There was a slight delay in taking the final wicket as England were forced to bowl only the spinners. The sun came out of nowhere to help England bring back its pacers and quite fittingly it was Broad who got the last wicket with a stubborn Siddle chipping a drive to mid off after a 48-ball stay.

Stuart Broad claimed his 2nd ten-wicket haul. The 27-year-old was in such terrific rhythm that he even bowled the fastest ball of the match which was recorded at 91 mph (146 kmph). Broad took 6 for 50 in the second innings to go along with his first innings figures of 5 for 71. Undoubtedly he was the Man of the Match for his bowling heroics.

Update at Tea on Day 4: Australia are well set to chase down the target of 299 as they progressed to 120 for 1 at Tea time. The only wicket that England could manage after the long rain interruption was that of first innings centurion Chris Rogers. The wicket fell in the 30th over when Rogers (49 from 100 balls) was squared up by an off break from Swann which drifted in towards middle but turned away to take a low edge to slip. At Tea, the Aussies need just another 179 runs with David Warner batting on 57 in the company of Usman Khawaja.

Update at Lunch on Day 4: The fourth Test at Chester-le-Street is nicely poised with Australia needing a chaseable target of 299. The tourists batted out five overs before lunch without any casualty. Chris Rogers survived a close lbw call which was reviewed by England but in vain. The Aussies having bowled out England for 330 in the morning finished at 11 for no loss. While the match is set for a nice finish, weather at Durham looks bad with heavy showers likely to interrupt the proceedings.

The second new ball did all the damage for the Aussies. Ryan Harris captured four out of the five wickets England had in their second innings going into Day 4. Harris first got Ian Bell bowled off an inside edge with one that stayed low and nipped back. Bell fell after scoring a superb 113 from 210 balls with 11 fours. Matt Prior got out the very next ball for a duck after a short of length delivery dropped off his elbow onto the stumps to leave England at 251 for 7.

Stuart Broad got out in the 85th over fending off a nasty lifer from Harris to gully. England after that got a crucial 42-run stand for the 9th wicket between Tim Bresnan and Graeme Swann. Overnight batsman Bresnan went onto score 45 from 90 balls before he was caught and bowled driving early to a Harris delivery. The English innings was wrapped up by Nathan Lyon when he got one to turn away with bounce around middle to have last man Anderson caught behind. Graeme Swann remained unbeaten with a precious cameo of 30* from 24 balls.

For the Aussies, Ryan Harris was outstanding taking a career best of 7 for 117 in 28 overs.