India has to start looking beyond Sachin Tendulkar

For starters, I seriously believe that India deserves a better performer than Sachin Tendulkar at no.4. Everything may look well from outside following the 4-0 whitewash over the Aussies but it was against a team which was completely inexperienced to the Indian conditions and a bunch of players who are yet to establish themselves at this level.

For starters, I seriously believe that India deserves a better performer than Sachin Tendulkar at no.4. Everything may look well from outside following the 4-0 whitewash over the Aussies but it was against a team which was completely inexperienced to the Indian conditions and a bunch of players who are yet to establish themselves at this level.

Tendulkar for sure played a lot better than what he did in the home series against New Zealand and England. I think the change was in his mindset which reflected in the way he batted against the Aussies in the just concluded series. Against England, he was keen on spending time at the wicket and bat with an extra cautious approach which didn’t give him any results. In the Series against the Aussies, Tendulkar was looking to get to starts first by playing some attacking shots. That positive mindset allowed him to do better and it was a mixed bag for him as far as the results were concerned. 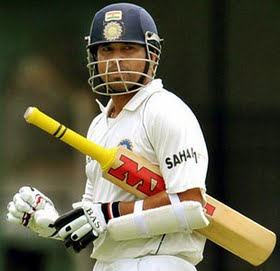 Being a Tendulkar critic, I was stunned by the way he punched James Pattinson, one of the world’s fastest bowlers for boundaries as soon as he arrived at the crease in the Chennai Test. Everything was so perfect with Tendulkar, his back and across movements, his timing and the majesty of his strokeplay. It was disappointing to see him miss out on a hundred though which wasn’t far away. MS Dhoni on the other hand got a start and went onto convert into a maiden double century with the Australian attack tiring. Against New Zealand and England, we thought that the great man’s reflexes had slowed down. His footwork wasn’t quick enough against the fast bowlers but he proved that wrong against the Aussies. But having said that, Tendulkar just didn’t produce the runs that would have justified his selection in the team.

Somewhere one gets a feeling that Tendulkar is trying too hard rather than enjoying the game. He has struggled against bowlers who would not have got into their national sides a decade ago. The quality of the bowlers today is nowhere near the quality that we had seen in the 1990s and say 2000s when Tendulkar often got the better of them. In today’s cricket, a batsman scoring a 100 is just good for himself; the 100 figure doesn’t help teams win Test matches anymore. It is the bigger 100s that are needed. Shikhar Dhawan showed that with his 187, MS Dhoni scored a double century, Pujara scored a double century and Murali Vijay scored two big hundreds. Those are the knocks that win Test matches for the country.

We have seen how the South African and English batsmen have been scoring in recent times. The likes of Hashim Amla, Jacques Kallis, Alastair Cook etc, all of them score big hundreds. One should not forget Michael Clarke who had scored four double centuries last year. It is good to note that our Indian batsmen like Pujara, Vijay, Dhawan are following their footsteps. Just hope that someone like Kohli also learns that quickly.

The problem with Tendulkar of today is that he drains himself out mentally to get to three figures. By the time he reaches the 70s and 80s which has become a rarity too, the weight of expectations on him to score the hundred pulls him down completely. Somewhere comes the tame shot in anxiety to lose his wicket having done all the hardwork to reach the 80s and exit in disappointment. Really can’t understand why India keeps on persisting with Tendulkar despite all his struggles of late. It is certainly not that India doesn’t have enough talent pool. Right now there are quite a few players who can do much better than what Tendulkar has been doing in the middle in the recent times. Why waste their precious years and invest on a man who is going to be 40 next month? Has the BCCI given special reservation to Tendulkar or what? No matter what he does or not, the no.4 spot is for him. This sycophancy of sorts has to be put to an end if Indian Cricket has to move forward.

I am really disappointed that a man who has been called as the Master Blaster gets out to an innocuous looking bowler like Nathan Lyon. It is not just about the dismissals but the number of times Sachin Tendulkar has looked vulnerable and close to getting out in the time that he spends in the middle. India has got to start looking beyond Tendulkar and explore for other options. One of them is to bring back Virender Sehwag in the team and have him bat at no.4. Sehwag may have been dropped for his consistent failures of late but remember he is not a natural opener but a pure middle order batsman. Sehwag took the courage of risking his career by agreeing to open for India and now he deserves to get his fair opportunities in the middle order.