Sarfrza and Yasir caused a humbling defeat for Sri Lanka

Pakistan defeated Sri Lanka by 135 runs in the third One Day International of the series at the R Premadasa Stadium in Colombo. Batting first, visitors posted a par above score of 316 for four, thanks mainly

Pakistan defeated Sri Lanka by 135 runs in the third One Day International of the series at the R Premadasa Stadium in Colombo. Batting first, visitors posted a par above score of 316 for four, thanks mainly to Sarfraz Ahmed for his 74-balls 77-runs inning. In reply, Sri Lanka collapsed at 181 all-out. Pakistan now lead the five-matches ODI series 2-1.

It was one of the worse days in cricketing history of Sri Lanka as the crowd got violent and starting throwing rocks inside the southeastern stand. When the offenders were evicted from the ground, the stone were thrown from outside the ground in projectile motion. Javagal Srinath, the match referee suspended the game until the situation was controlled by the stadium authorities. 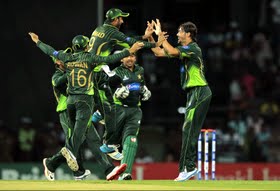 After winning the toss and batting first, Pakistan got off to a good start. Ahmed Shehzad and skipper Azhar Ali added 93 runs for the first wicket. Azhar Ali was not that aggressive but he is very adept in rotating the strike. Shehzad was playing beautifully especially his shots off Mathews between mid-wicket and long-on. Experienced campaigner, Malinga provided the first breakthrough for Sri Lanka. He set up Shehzad in short pitch deliveries and eventually got rid of him when he tried a pull shot. Mohammad Hafeez at No. 3 and Sarfraz Ahmed promoted at No. 4 played beautifully for their half-century. Sarfraz largely depended on taking the quick singles and two’s. He made full use of the deliveries when bowlers made mistake in their line and length. His ability to adjust himself equally against pace and spin worked for him as he scored run-a-ball half century. In trying to take quick run, he got run out in the depth over. Sarfraz inning ensured that Pakistan consolidated on the early start they had got and not lose the momentum. Hafeez inning was not that confident as Sarfraz as he mis-timed and edged many deliveries but he was lucky enough that ball didn’t find any fielder before he scored 54 –runs of 64-balls with the help of four fours. Mohammad Rizwan and Shoaib Mailk played a cameo to help Pakistan get past 300. The pair hit three boundaries and a six in last over of the inning off Malinga.

Sri Lanka batsmen were unable to repeat their performance of Pallekele. Dilshan was holed out at mid-off for 14 and Perera was caught brilliantly by Sarfraz. Anwar Ali took both the wickets. Lahiru Thirimane tried his best to bring the chase on track but he was running out of partners at the other end. Upul Thranga was stumped off Yasir Shah for 16 and Angelo Mathews was caught by Malik at long-off. Thirimane got past his half-century but when Dinesh Chandimal was dismissed; leaving Sri Lanka at 130 for 5, Sri Lanka’s hope of taking an edge in the series was virtually over.

Man of the Match: Sarfraz Ahmed