Things change rather swiftly in T20 cricket, the IPL to be more specific. Not long ago, Rajasthan Royals were on a victory run, having won five out of five. Since, they have lost two and their last match was washed out due to rain. This means, they head into the match against Royal Challengers Bangalore having not tasted victory for a while now. Bangalore, on the other hand, have recovered well after stumbling early on, having won their last two matches convincingly. They would be keen to continue their winning run while Rajasthan would like to get back to winning ways as well. 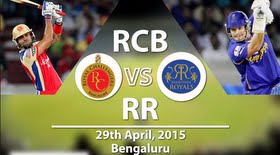 The return of Mitchell Starc from injury has proved to be a massive boost for Bangalore, and he has been key to their triumphs in the last two matches. He picked up three wickets the last time these two teams met to set up a comprehensive nine-wicket win at Ahmedabad. The victory meant Bangalore had finally broken the sequence of three consecutive losses, which had pushed them to the bottom of the table. Then, in their last game, they went on to thrash Delhi Daredevils by 10 wickets courtesy another superb bowling performance by Starc.

Bangalore’s batsmen have also lifted their game in the last two matches. They were chasing only 130 in the match against Royals, but skipper Virat Kohli and AB de Villiers took the opportunity to increase their confidence by making 62 and 47 not out respectively. Against Delhi, their bowlers had done a fantastic job to restrict the opponents to 95. Still, credit must be given to Chris Gayle and Kohli for ensuring that they shut the door completely on Delhi. The left- handed West Indian’s return to form with a blazing 62 not out was a massive plus for Bangalore.

Although Royals are still comfortably placed, they haven’t been the same team since their defeat to Kings XI Punjab in the Super Over. The subsequent loss to Bangalore followed by the washout against Kolkata hasn’t helped their cause. They would be keen to resume usual duty. Ajinkya Rahane, as he has done throughout this season, will be looked upon to provide impetus in the batting department. Skipper Shane Watson, Steven Smith, Deepak Hooda and Sanju Samson will also need to get among the runs to make Rajasthan feel comfortable again.

The Royals have a formidable bowling line-up in James Faulkner, Chris Morris, skipper Watson himself and Pravin Tambe as the lead the spinner. They have struggled in the last few games since their batsmen haven’t been up to the mark. But, the bowlers must also prove that they can pull the team out of a rut in case their batsmen fail. This is what Chennai did so brilliantly against Kolkata on Tuesday. On current form, Bangalore would believe they have a slight edge over Rajasthan, but the latter would be keen to prove otherwise.