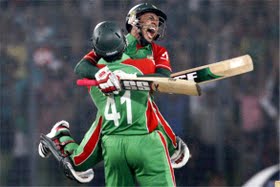 When MushfiqurRahim slammed the penultimate ball of the tour opener for a match-winning six, the packed stands in Mirpur erupted as one. It was a spontaneous expression of joy from a crowd that hadn't seen their side winning a Twenty20 international since 2007. But the reaction also underlined the dangerous extremes inhabited by the Bangladesh cricket fan. While their team has struggled to shed the minnow tag - the occasional series wins against West Indies and New Zealand notwithstanding - the fans have tended to look at each victory as a new dawn, and every defeat as a national slight.


Mushfiqur's biggest challenge as he takes over the leadership will be finding ways to manage these unfair expectations. It was a challenge that caught up with Shakib Al Hasan during Bangladesh's roller-coaster World Cup campaign. One day he was joking with journalists, relieved after a hard-fought win against Ireland, only for the video to go viral and earn him brickbats after the crushing loss to West Indies. When Bangladesh somehow scrambled to victory against England in their next game, Shakib was in tears - the reaction of a man forced to live on the edge.

Mushfiqur would have seen Shakib's travails from close quarters, and will have to tread the tricky line now. Tuesday's win has already raised expectations, and a change in form will not be easily tolerated. Mushfiqur must be concerned since West Indies have the personnel to effect a turnaround. The exclusion of DevendraBishoo caught up with them on the spinner-friendly Mirpur surface, but they are unlikely to repeat the gaffe on the same pitch. The visitors will also be bolstered by the inclusion of Kieron Pollard, who has developed a reputation for minnow-bashing. The biggest worry for the visitors will be their middle order's dodginess against Bangladesh's platoon of left-arm spinners. The in-form Marlon Samuels will remain their point man, but can Darren Bravo and the rest play around him?

With Chris Gayle seemingly out of the picture, Adrian Barath will be expected to take over as the prime mover in the West Indies top order. Barath has the game to do well at the highest level - you don't hit Test hundreds on debut at the Gabba without having serious talent. West Indies' emphasis on youth gives him an extended opportunity at the top and he will want to capitalise when the ball is new.

"Honest trier." "Never-say-die attitude." "Can't be faulted for effort." Darren Sammy's supporters tend to deal in intangibles when they explain his value to the side. If emotions are cast aside, Sammy comes across as a limited, but effective, back-up seamer, while his batting is of the hit-or-miss variety. Questions remain over whether he justifies a spot in the side, potentially at the expense of the pacyKemar Roach. Sammy will want to lay those questions to rest in this series.

Pollard should come in for Danza Hyatt in the West Indies middle order, while Bishoo could slot in for Carlos Brathwaite. Given the frailty of the batting line-up against spin, Kieran Powell might feature in team discussions as well.

Bangladesh are unlikely to alter their combination, though ShuvagotoHom could push AlokKapali out of the XI. Mahmudullah's continued absence should give NasirHossain another chance to come good.

Bangladesh have beaten West Indies only three times in 17 attempts, all during their 2009 tour of the Caribbean, against a third-string side.

Tuesday's T20I win was Bangladesh's first at home against West Indies, across all formats