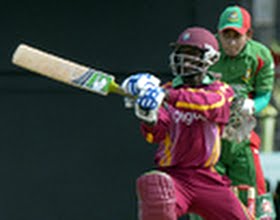 "Let bygones be bygones" is a mantra that the think-tank may do well to supply the host along with amulet and rosary beads. October, may be in it's early stage, yet the fest has already started on full phase with Marlon Samuels hunkering in a ton of runs in a T20 practice match against a nubile BCB XI.

Chaos spawned Mushfiqur Rahman and Mahmudullah Riyad starring as captain and vice-captain amidst controversies and polarized fan base. Newly appointed coach Stuart Law is yet to savor a series win having succumbed to a 2-3 defeat to Zimbabwe in addition to a test loss. But the fact of the matter remains no matter what may be the rap sheet of the two teams and their vis-à-vis encounters in any format of the game, it will fare well to start anew fresh with a blank slate in mind.

A statistical oddity seems to be the fact that the Twenty20 record of the teams is at level. The very first chink in Windies armor was brought about by Mohammad Ashraful's stormy century in Johannesburg, which was duly avenged within 2 years by a second string West Indian team in Basseterre, 2009. Retribution devolved to a frantic nightmare with a Suleiman Benn forging a win after bowling out Bangladesh for a paltry 58 in World Cup 2011.

The current state of affairs of the Tigers is at turmoil with Academy coach Ross Turner leaving and the team being in a limbo with no bowling coach until the arrival of Shane Jurgensen. Rampaul in the first One Day practice match, and Samuels in the T20 helped them earn wins which no doubt will be a confidence booster to their win-loss ratio of 0.76 having won 13 of their 32 T20 matches. On the flip side, we have a host plagued with changes, practice match defeats and a feeble win/loss ratio 0.23 with only 3 wins out of 16 matches. To add insult to injury no DRS will be available for the series. However odds may it be stacked against the host there is no preset template or an existent context for a bettor to rest his fortune.

Consider Ashraful snipping the guest's tail with three wickets in just two over spell with his infamous doosraful. Shakib-al-Hassan, despite being ordered down the rank remains a far better promise since Rafique era. Tamim is a contender for Wisden, while helmsman Mushfiqur had a fairly decent stint against Zimbabwe. These are some big names with experiences. Again and again, we fans talked about giving the team time to mature and sync. Well, the time is now and here. With an absentee Gayle and a relatively undermined West Indian squad, Libra may scale in favor of either team.

Players to watch out for

West Indies: Lethal as usual, Kieron Pollard, will be man to do the most damage once the platform is set.
Bangladesh: A 53-ball 90 in domestic stint T20 match should warrant enough motivation for the ever flamboyant Tamim Iqbal to cause the 'first ding' in opposition's defense.