Eng v Ind 2011 1st Test Match: Stuart Broad has kept his place in England's Test squad while Tim Bresnan has been recalled ahead of Steven Finn for the opening match against India, at Lord's, on July 21. 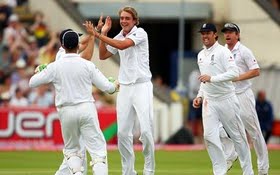 Stuart Broad has kept his place in England's Test squad while Tim Bresnan has been recalled ahead of Steven Finn for the opening match against India, at Lord's, on July 21.

Andrew Strauss and Andy Flower are big supporters of what Broad brings to the team - despite just eight wickets in the Tests against Sri Lanka - but the decision to drop him last week has shaken up the pecking order even though Broad is Twenty20 captain. Having retained his place in the squad he still faces pressure for his place in the final XI from Bresnan who played a vital role in the Ashes series at Melbourne and Sydney.

Bresnan missed the chance to build on his successful winter after he was sidelined by the recurrence of a calf injury at the start of the season, which meant Finn earned an opportunity against Sri Lanka when James Anderson missed the Lord's Test with a side strain. However, it was clear how much England rate him when he was brought straight back into the one-day side for the Sri Lanka series having recovered from injury.