Stand-in India skipper Rohit Sharma credited his team for his impressive record as captain in limited overs internationals stating a captain is only as good as his team.

"If you have a team like that, the captain will always look good. I try and do my job but if you don't have the support of the rest of the 10 players out on the field, it's never easy. Credit goes to all the boys who put in the effort and soaked in the pressure whenever it was required,” Rohit was quoted as saying at the post-match presentation after India’s pulsating last-ball win. 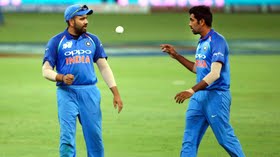 Rohit also praised the way Bangladesh fought till the very end despite chasing a low score. "You have to give some credit to them (Bangladesh) as well. They batted brilliantly. They put us under pressure in the first 10 overs. But we knew once the ball gets older, we can get back into the game with our quality spinners. That's what exactly happened. They never allowed the Bangladesh batsmen to get off the hook,” Rohit stated.