Dhoni knows exactly what he wants to do: Kohli

India continued their unbeaten run in World Cup 2019 with a massive 125-run triumph over West Indies, who were knocked out of the tournament.

India continued their unbeaten run in World Cup 2019 with a massive 125-run triumph over West Indies, who were knocked out of the tournament. Batting first, India managed a challenging 268 for 7 on board, courtesy fifties from skipper Virat Kohli and MS Dhoni. In response, West Indies crumbled to 143 all out as Mohammed Shami claimed 4 for 16.

At the post-match presentation, skipper Virat Kohli lauded Dhoni's effort and said his late hitting made all the difference. The former India skipper finished with 56 from 61 balls, hitting two sixes and a four in the last over.

“Dhoni knows exactly what he wants to do in the middle. When he has an off day here and there, everyone gets up and starts talking.” Kohli said. 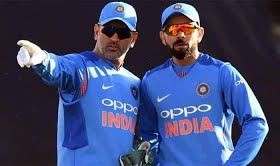 “But what we have always maintained in the team is backing him. He has won us so many games. The best thing about having someone like him is when you need those extra 15-20 runs, he knows exactly how to get them with the tail. Keeping strike in the end and finishing off with two big sixes was something which gave us a lot of boost as a team.

“We were looking at 250 but we got close to 270 because he was out in the middle. Hardik was there as well of course, but Dhoni’s experience, 8 out of 10 times has come good for us. He’s always been that way, to play calculated cricket is Dhoni’s strength. He's a legend of the game. We all know that. He’s doing a tremendous job for us, just hope he can continue.”

Asked about his own man of the match-winning performance, Kohli said his game plan remains to run quickly between the wickets and pick ones and twos, thus allowing the scorecard to keep ticking.

“That's my game plan, I look to play in my own way, happy to take the ones and twos which I think is a big factor in ODI cricket, around 70% of my runs come in this way. On two difficult pitches, I'm happy with my contribution and look forward to doing more of the same in the future.”​

Kohli admitted that the team's batting hasn't been at the desired level in the last two matches. At the same time, he was pleased that the team managed to lift itself and turn things around.

“Last two games, things haven't gone like we thought they would, looking at the first few games that we played. These haven't been massive scoring games. But we've found ways of winning. Intensity has been the standout thing for me. When you ask the boys to stop 15 more in the field, they’re stopping 20.

“Bodies on the line, showing the desperation to win, the opposition also feels like, this team is here to win and not just compete. Mindset really matters, and there is a lot of self-belief in the team right now. We feel we can win from any situation. Nothing is impossible," Kohli went on to add.