Triumph against India has given Afridi plenty of self-belief

Expecting Shahid Afridi to pull off improbable-looking chases in consecutive matches sounds a bit too far-fetched.

Expecting Shahid Afridi to pull off improbable-looking chases in consecutive matches sounds a bit too far-fetched. After all, consistency has never been forte. However, when a Pakistani succeeds against India, it does something to his self-confidence. We all know how players from the two sides pride themselves on doing well against each other. it is this very self-belief that was evident in Afridi’s batting as he went about marauding the Bangladesh bowling and, in a whiff, killed their chances of a historic triumph while also securing a place for Pakistan in the final. 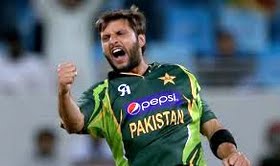 Unlike in the game against India, where a couple of big hits from Afridi sealed the deal for Pakistan, in the match against Bangladesh the task was much tougher, actually bordering on the impossible. There were too many runs to get and only half the deliveries to do so. The fact that Afridi was batting with many runs to get also meant that they had lost most of their main batsmen. As a result what Pakistan needed from Afridi this time was a proper knock and not just a cameo. Well, he delivered a blockbuster innings, and yet made it seem like we were watching just the trailer.

The brutality of Afridi’s batting does not need to be spoken about. However, the manner in which he cleared the field and the number of times he did so with utmost ease, was most astonishing, even if it was only against a Bangladesh attack. Afridi plundered the bowling attack so cruelly as if he wanted to prove his magical innings against India the other day was on fluke. Whatever his intentions, Afridi passed out with flying colours. He had luck on his side when a mistimed stroke was dropped, but otherwise it was a near flawless innings.

Over the years, Pakistan cricket have been wary of what to expect with Afridi. Most of the times, he has come in and shown flashes of brilliance before throwing his wicket away. This modus operandi of his has been irrespective of the situation, even if Pakistan needed a run a ball with only a few wickets in hand. Afridi has been criticised for the same and has even been termed irresponsible by many. But the veteran of 350 plus ODI games has refused to alter his style of play, and in this Asia Cup, it has worked in Pakistan’s favour.

Yes, Afridi did take his time against India briefly, running some singles. But, it wasn’t long before he went for the big strokes. Had be mistimed even one of those two sixes, the critics would have been after him again. Actually, he did not connect both strokes in the middle of the bat, but such is his power that the balls sailed over the ropes. The two sixes revived Afridi’s confidence in his own ability. Against Bangladesh, it was evident that he was hitting the ball cleanly. Sri Lanka better be mindful of the Boom Boom Afridi threat.