DON’T cry, Sachin, you’re in good company. Most great players of your generation missed out on the Lord’s honours board.

DON’T cry, Sachin, you’re in good company. Most great players of your generation missed out on the Lord’s honours board. 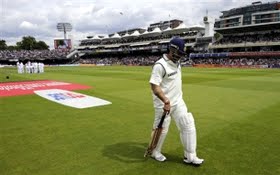 Shane Warne never made it on to the visitors’ dressing room wall in gold leaf paint at ­HQ. Nor did Brian Lara, Ricky Ponting, Curtly Ambrose or Muttiah­Muralitharan.

Inconceivably, for a deity with 99 international centuries to his name, SachinTendulkar appears destined to join the cast of modern legends never to score a hundred or take five wickets in a Lord’s Test. He has been trying since 1990, a match he adorned with a ­stunning one-handed catch to dismiss Allan Lamb, mere child’s play for a 17-year-old.

Appearing on the same bill was Graham Gooch, who made 333 in the first dig, 123 in the second innings and sealed England’s win with a direct hit. But unless he fancies playing on until he is stooping like Father Time on his weathervane above the Tavern, the nearest Tendulkar will come to ­decorating the Lord’s pavilion will be his portrait hanging in the Long Room.

Amid scenes unrivalled since 20,000 fans were locked out of the Old Trafford Ashes Test denouement in 2005, queues to watch Tendulkar stretched round the ground and halfway back to Maida Vale.

If Test cricket is dying, the funeral wasn’t half popular. At the 2,000th Test, every seat was sold. On People’s Monday, even the corporate swillers filled their troughs for the finale of a five-act drama worth every syllable of the hype and every glass of Pimms necked.

And at 5.24pm, when the ­rejuvenated Stuart Broad trapped last man Ishant Sharma so plumb in front even Billy Bowden had to raise his crooked digit, England were halfway to paradise.

Travelling in the opposite direction was Tendulkar, who will be ­remembered as the Bradman of his era – with a top score of 37 at Lord’s. Five Tests, nine innings, 195 runs at 21.66, thanks for coming, Little Master.

On his way to the middle, Tendulkar was afforded the kind of ­reception Lord’s crowds reserve for greats. And on his way back to the orbit of mere mortals, he became the first man afforded a standing ovation for a scratchy 12 by members resigned never to see him score a century at the home of cricket.