Losses in Australia, England seem to have affected Dhoni adversely

Of late, Indian captain M S Dhoni’s post match comments have become rather entertaining but far from enlightening. Following India’s hard-fought win against England at Motera, Ahmedabad, Dhoni was seen stressing more on the quality of umpiring and the nature of the pitch rather than the overall performance of his team. He did praise his side, of course, but some of the other statements he made during the interaction made one feel that Dhoni is not the captain cool he once used to be. And we can only wonder whether the whitewashes in Australia and England have affected him adversely. 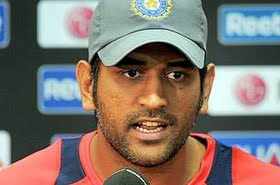 Taking a dig at the umpires, Dhoni commented that things were rather tough for his bowlers especially since they had to take ‘more than 10 wickets in an innings’. Coming from Dhoni, that was not only a shocker, but also a un-sportsman like behaviour. Agreed, a few close lbw shouts went against the Indian team. Then again, if Dhoni is such a firm believer in fair decisions being given, why does he appeal when the batsman is clearly not out? Also, Dhoni had no right to make such a statement especially when it was quite evident that India were lucky to get Samit Patel out lbw in both the innings. Both the decisions seemed somewhat dubious, but neither Dhoni nor any member of the Indian side complained. Did they?

The Indian captain’s comments on the pitch were also somewhat on the unfair side. Agreed there could have been more turn on the fourth and fifth day. Still, Dhoni’s statements force one to believe that the Indian team is heavily dependent on the surface to produce results. According to him, the toss played the vital role in deciding the fate of the Ahmedabad Test. Does that imply that India would have found it tough to clinch the game had England batted first? So much for playing in home conditions.

At the post-match conference, Dhoni went to the extent of saying that Indian pitches must start turning right from day one. Now, that is a first from an Indian captain really. His comparison that pitches abroad seam right from the first day gave away the wounds that he has been nursing following the losses in England and Australia. Yes, the pitches offer moment in Australia and England, but those are places where the ball naturally moves around irrespective of the surface.

All these years, India have played on spinning pitches at home. But, rarely has anyone asked for pitches that turn from day one. The pattern has always been that pitches in India have produced plenty of runs on the opening two days before beginning to turn prodigiously from day three onwards. It is on surfaces like the one at Motera that India have tasted most of their successes at home. Everytime, they haven’t necessarily batted first. Yet, bowlers and Anil Kumble and Harbhajan Singh have delivered in conditions similar to the one at Motera. By asking for rank turners, Dhoni is advocating more wickets like the one at Mumbai in 2004. India won that Test against Australia inside two and a half days, but how many fans find that win memorable?

Analysing Dhoni’s remarks lately, one can only conclude that he is desperate to whitewash both England and Australia at home, and thus seek revenge. His desire is spot on, but his approach is questionable.