Pakistan clinched a series-levelling 196-run win over the West Indies in Saint Kitts with more than two sessions to spare as they carried on from where they had left on the penultimate day with another dominant performance.

Pakistan clinched a series-levelling 196-run win over the West Indies in Saint Kitts with more than two sessions to spare as they carried on from where they had left on the penultimate day with another dominant performance.

Needing five wickets to win the game when play resumed, they got them at a cost of 100 runs as spinners Abdur Rehman and Saeed Ajmal shared seven of the wickets to fall in the final innings of the match.

An early wicket settled any nerves they might have had in defending a lead of 423 when Brendan Nash failed to add to his overnight score of 30 before he prodded a sharp turning delivery from Ajmal into the hands of Taufeeq Umar at slip. Umar, who scored a fine century over days three and four, picked up his fifth catch of the game and it was by far the simplest. 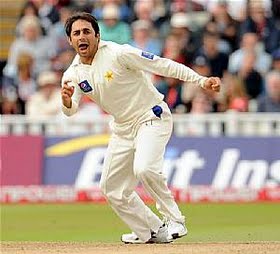 Next to go was Carlton Baugh, who made 18 before he was trapped in front by the impressive left-arm spin of Rehman and Darren Sammy's enterprising cameo of 41 in 51 balls ended when he limply chipped Ajmal to Misbah-ul-Haq at midwicket.

Ravi Rampaul smacked two big sixes before one more attempted big hit went awry and he was caught by Umar Akmal as Ajmal grabbed his third wicket and the West Indian innings then ended in disappointing circumstances when Kemar Roach (12) was run out having never threatened to make what should have been a comfortable run of the bowling of Rehman despite a direct hit by Wahab Riaz.

Devendra Bishoo, who performed outstandingly to help the West Indies go 1-0 up with a 40-run win in Guyana, was left unbeaten on three as Rehman returned four for 65 and Ajmal three for 81.

Pakistan earned their strong position in the match after they first sealed a first-innings lead, bowling out the West Indies for 226 in reply to 272 and then a century from Misbah, allied to that of Taufeeq, in their second innings, enabled them to declare on 377 for six.

Pakistan now head to Ireland where they will play two One-Day Internationals on 28th and 30th May while India now head to the West Indies for Test, ODI and Twenty20 International series beginning in June.