Headingley: England carry on their impressive run of good form to the second ODI against Sri Lanka at Headingley. After an impressive Test series and a smooth transition from the longer version of the game to the 50-over format which saw the hosts thrash the Lankans by 110 runs to take a 1-0 lead in the five-match series. 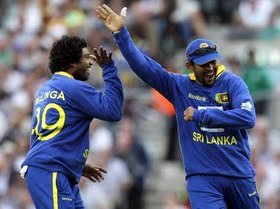 Headingley: England carry on their impressive run of good form to the second ODI against Sri Lanka at Headingley. After an impressive Test series and a smooth transition from the longer version of the game to the 50-over format which saw the hosts thrash the Lankans by 110 runs to take a 1-0 lead in the five-match series.

The first ODI in no way went to show that it was the same Sri Lankan team that actually made it all the way to the World Cup 2011 against India and ended up giving a good account of themselves in the final.

Inspite of picking three wickets, Lasith Malinga does not look interested in wearing the purple colour of the Lankan side.

Kumar Sangakkara and Mahela Jayawardene hardly made an impact and left the crease within no time. Angelo Matthews was a shadow of his all-round best as he too struggled with bat and ball both, and when you have a 42-year old politician opening for your team with the bat you know something majorly is wrong with the top of your order.

Banned by a drug tribunal, Upul Tharanga's ridiculous ease was thoroughly missed at the head of the order.

Sri Lanka have been cursed by bad weather since they arrived in England, and forecasts suggest that Headingley, for once, will be on its best behaviour.

After the memories of Sri Lanka's collapse to 121 all out in a rain-reduced 32-over affair at the Oval on Tuesday, Law is grateful for that.

"When you get walloped like that it takes a bit out of you," he said. "We're here to show the rest of the world that we're not that bad and that we deserve the No. 3 ranking in one-day cricket.

"The wicket wasn't that hard to bat on. England proved that. The weather can muck you up a bit. You go there preparing for 50-over cricket; you start, and then it's all of a sudden cut back. But that's an excuse you've got to live down.

"During the World Cup, we didn't have batting meetings at all. We just said, 'This is the plan. Go out there, score runs, do it your way and it all comes off.' Our boys just like to go to go out there and play our natural games. If we do that, with clear minds, generally it works pretty well. Here it's slightly different, with the ball doing a little bit more. But we've been here long enough to realise that. This wicket looks rock hard and pretty good to bat on."

But what of the English mentality?

What seems to be the matter of concern is the England personnel in the playing eleven. While James Anderson and Eoin Morgan are clearly the two top ODI players in the side, the home conditions and an already demotivated Sri Lankan team after the Test series loss is too easy a proposition for the Three Lions.

Yes, Sri Lanka's ODI lineup is worlds apart from their Test eleven but Malinga's presence has been nullified and dealt with, spinners Randiv and Mendis have hardly given the English batsman nightmares.

With England chasing the No. 1 spot in the Test ranking and seeking constant improvement in the ODI setup, facing a team like Sri Lanka, before World Cup winners and Test ranking leaders India make the journey is really a topic England need to think about and try to polish thier skill-set as much as possible against the 2011 World Cup runners-up.