KKR down Pune Warriors by 46 runs

Defending Champions Kolkata Knight Riders collected what is only their fifth win in 13 matches and is all set to crash out of the IPL. Their 46-run win over hosts Pune Warriors was a big one but serves them only as a consolation.

Defending Champions Kolkata Knight Riders collected what is only their fifth win in 13 matches and is all set to crash out of the IPL. Their 46-run win over hosts Pune Warriors was a big one but serves them only as a consolation.

Batting first after winning the toss, KKR were riding on the shoulders of Skipper Gauam Gambhir who with Manvinder Bisla gave a promising start of 45 in 5.2 overs. KKR were well placed at 75 for 2 in the 12th over before they lost the crucial wicket of Eoin Morgan. A couple of big blows after this including the wicket of the well set Gautam Gambhir (50 from 44 balls with 6 fours) and Yusuf Pathan left KKR stuttering at 97 for 5 in the 16th over. 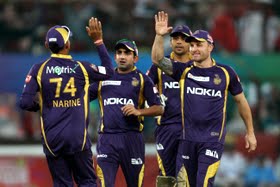 Just when KKR were heading towards a disappointing total, came a crucial innings of 31 off 21 balls from Ryan ten Doeschate. As a result, KKR ended up with a competitive total of 152 for 6 on a pitch with variable bounce. Bhuvneshwar Kumar was the pick of the bowlers for Pune taking 3 for 25 in 4 overs.

Pune Warriors in their run chase lost their Skipper Aaron Finch early, clean bowled by Kallis. A ball prior to that, Finch was supposed to be run out at the bowling end when Kallis had deflected an Uthappa straight drive onto the stumps. However, Umpire Taufel got it wrong and gave the batsman not out leaving Kallis to confront with the ground Umpires. Pune were given a second blow when Yuvraj was forced to nick an away going delivery from Balaji.

The hosts slipped into a losing position in the 11th over when a fighting Robin Uthappa (31 from 35 balls) got out cutting Iqbal Abdulla to point leaving the Pune Warriors at 53 for 4. Pune slipped away quickly to defeat after that, bowled out for 106 in 19.3 overs. Angelo Mathews managed to reduce the margin of defeat with a 28-ball 40 that contained 4 sixes.

For KKR, Balaji claimed 3 for 19 while Sunil Narine bowled a mean spell of 4-0-12-2. The Man of the Match award was given to Gautam Gambhir.

Toss and Teams: Kolkata Knight Riders have won the toss and elected to bat first against Pune Warriors at Pune.