Warner: Have had time off to work harder on my game

Playing his final match of Indian T20, David Warner signed off on a high as he blasted 81 off 56 balls against Punjab. The whirlwind knock led Hyderabad to 212 for 6

Playing his final match of Indian T20, David Warner signed off on a high as he blasted 81 off 56 balls against Punjab. The whirlwind knock led Hyderabad to 212 for 6. In response, Punjab lost Chris Gayle early. And, while Lokesh Rahul continued his good run with 79, the rest of the batting frittered away as Punjab finished on 167 for 8. Both Rashid Khan and Khaleel Ahmed claimed three-for.

Speaking at the post-match presentation, Warner whose 692 runs is thus far the highest in the tournament, said he has worked really hard on his game in the time off that he has got owing to his suspension from international cricket for 12 months over his role in the ball-tampering scandal. 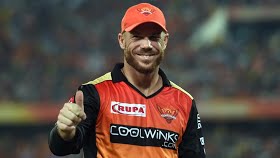 "I have had time off to work harder at my game. Put the bat down for 16-18 weeks and just worked hard on being the best father and husband, that has worked for me. Yeah, I try to be the funny man in the team, the prankster," Warner said.

He was also happy to see his hard work pay off with an excellent Indian T20 season.“It’s obviously great to get out there and do your job properly. We’ve got a great deck to bat on. The groundstaff has worked tirelessly to prepare good wickets and then it’s about going back to basics and backing your instincts.

"I think it just goes back to being still as a batsman. I get the tendency to moving around a bit if there have been a few dots. But I have worked hard over the last few months. The gameplan is to back yourself, just back your natural game," he added.

Speaking about the World Cup, which begins in a month's time, Warner said he expected the tracks in England to be batsman-friendly.

"This World Cup, you’ll see some high scores. Hopefully, the ball doesn’t swing as much. Obviously, England is the home team and they’re great. We’re world champions. I’m sure it’ll be great," he went on to say.