Sachin Tendulkar who, at 39, still harbours ambitions of scoring big for India, the hundred against Railways on the opening day of the Ranji Trophy season 2012

For a man who has hundred international tons to his name, a first class century shouldn’t mean much. But for Sachin Tendulkar who, at 39, still harbours ambitions of scoring big for India, the hundred against Railways on the opening day of the Ranji Trophy season would be very close to his heart. This, since the match is his first Ranji Trophy game after a long time. Also, while he has been away on international duty, he has been struggling a lot lately. Even in his Test assignment against New Zealand, he had a miserable time, getting bowled cheaply game after game. 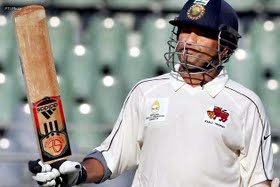 Although this latest first class hundred cannot be viewed as a return to form for Tendulkar, since the Tests against England would be a totally different proposition, the knock would at least give the Mumbai maestro the confidence of having some big runs behind him going into the Tests against the Englishmen. Cricket, after all, is a confidence game. And if Tendulkar can build on the knock against Railways, nothing better than it for Indian cricket. This is a phase in Indian cricket when the team desperately needs the legend to be at his best.

Runs from Tendulkar against England would be extremely vital in the context that Indian openers Gautam Gambhir and Virender Sehwag just doesn’t seem to be able to get out of the rut they have got themselves into. Gambhir’s statement a few days ago stating they are being unnecessarily being targeted was also a clear indication that the Indian openers aren’t in the right frame of mind. Their struggles continued on the opening day of the Ranji season as well. On current form, or the absolute lack of it, expecting Gambhir and Sehwag to perform against England would be almost like a miracle.

Tendulkar’s presence in the middle-order would also be crucial since the batting line- up has been weakened to a great extent courtesy the retirements of Rahul Dravid and VVS Laxman. Although Cheteshwar Pujara has returned with a bang to the Indian Test squad, he still needs to prove himself over a period of time, and only then will be considered a dependable member of the squad. Laxman’s replacement, on the other hand, is yet to be finalised. While Yuvraj Singh is most likely to take over his spot, his fitness will remain a concern until he proves himself at the big stage all over again.

Having said all that, only Tendulkar roaring back to form won’t do any good for the Indian team. While it would be great for the side if Tendulkar returns to his best at the international level, only him performing would take the team back to the 90’s, when the master blaster was the sole saving grace even as the rest of the team members were mere passengers. Everyone from Sehwag to Dhoni to Zaheer Khan will need to be at their best against England. Only then can the demons of last year be buried