Toss: Scotland won the toss and elected to field 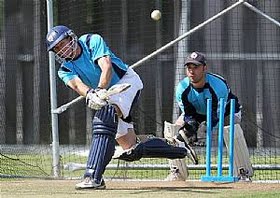 Berrington was one of four Scots to score a half-century as they overhauled Ireland's score of 320 for eight with nine balls to spare.

They were given the perfect platform by openers Fraser Watts (54) and Kyle Coetzer (89), who has been in rich form recently, as the pair put on 129 for the frist wicket.

CalumMacLeod then hit 29 before Coetzer was also dismissed before Josh Davey's unbeaten 50 kept the match in the balance.

Ireland hit back, George Dockrell and Boyd Rankin grabbing a pair of wickets but Berrington's assault, which included two fours and six sixes, turned the game back in Scotland's favour.

John Mooney had him caught by Mooney in the 47th over but Davey and Safyaan Sharif (1 not out) held their nerve to get Scotland over the line.

Earlier, Paul Stirling had crashed 113 in 96 balls to set Ireland on their way to their third-highest ODI total as Alex Cusack (71) and Andrew Poynter (51) also scored half-centuries.

Three wickets apiece for Josh Davey and Preston Mommsen kept Ireland in check and although Poynter's innings came from just 33 deliveries, he and Ireland were upstaged by Berrington's knock later in the day.

His efforts saw Scotland cross 300 for the first time in an ODI, but to the delight of the home fans, they didn't stop there.

The frist game in the series between Ireland and Sri Lanka was abandoned without a ball being bowled due to rain - Scotland now take on Sri Lanka on 13th July.