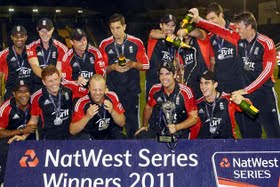 A power-packed knock by debutant Jonny Bairstow (41 off 21) and some useful contributions by Ravi Bopara (37 off 22), Jonathan Trott (63 off 60) and Ian Bell (26 off 21) helped England beat India by six wickets (D/L method) and sent the visitors home without a single win on their dismal tour.

Chasing a daunting target of 305 set by India, thanks to a brilliant century (107 off 93 deliveries) by ViratKohli, England got a revised target of 241 in 34 overs after rain interrupted play yet again. They reached there with ten balls remaining to win the fifth and final ODI in Cardiff on Friday.

India, plagued by the intermittent rains and yet another injury, this time to Munaf Patel (the tenth player Indian to have got injured on this tour), displayed another listless show as far as their bowling was concerned, with both the medium-pacers and spinners going for plenty.

Making his debut, the 21-year-old Bairstow played a quick-fire innings, hitting towering sixes as he stitched a match-winning partnership of 75 runs in just 40 balls with Ravi Bopara (37 not out off 22) at the end of England’s innings. The Yorkshireman got the man-of-the match for his breezy knock, which came at just the right time for England.

A dramatic over by Kohli

Earlier, after being hit for a boundary, the gentle medium pace of Kohli was good enough to entice Alastair Cook play a false stroke, but Dravid dropped a sitter while fielding at short fine leg. But the England skipper failed to read the slower delivery from the bowler and was bowled on the very next ball.

With the ball hardly getting any spin from the wet pitch, Trott and Bell then took full control of the situation to lay the early foundations. They hit the slow left-arm spin of RavindraJadeja for three sixes in one over, thus giving England a clear momentum. The over cost India 21 runs.

One shot too many

India finally got a breakthrough as Ian Bell perished, caught by substitute ManojTiwary off RP Singh for 26. After 25 overs, England were164-3, still needing 77 runs off 54 balls.

Then Jadeja, who had gone for 21 runs in his previous over, was brought on by Dhoni and provided the important wicket of Trott (63 off 60 balls). India looked to be back in the game, only for Bairstow to come to the party and spoil RahulDravid’sswansong.

For India, Kohli joined Dravid (69 off 79 balls) when India lost the wicket of Parthiv Patel with the score at 57-2, and the two batsmen kept the scoreboard moving, first with singles and then with occasional boundaries.

Both were going neck-to-neck till they entered their forties, but Kohli changed gears after completing his half-century in 54 deliveries. And Dravid, with the experience of 343 matches behind him, didn't mind to playing second fiddle to the young Delhi batsman. They complimented each other well and brought on the 100-run stand in 112 balls.

The two batsmen consolidated the Indian innings and took the visitors’ to 133-2 at the end of 30 overs.

Dravid followed Kohli and reached to his half-century in 62 balls. But immediately after completing the landmark, he was dropped on 51 by Jade Dernbach off his own bowling.

The 170-run stand (off 160 balls) between the two batsmen ended with the wicket of Dravid, who was bowled after failing to pick Graeme Swann'sflighted delivery.

A Royal send off:

Not only the thousands of NRIs, who had come in large numbers to cheer for one of their favourite heroes, but the Indian players in the dressing room balcony as well gave Dravid a good round of applause after the 38-year-old got out playing in his last innings in the Indian blue jersey. Every England player on the park also did not hesitate to give the classy batsman a pat on his back.

Dhoni then made full use of the launch pad set by centurion Kohli and Dravid to take India to a massive 304/6.

A forgetful day for Samit Patel

After dropping a sitter of AjinkyaRahane (26 off 47 balls) earlier in the innings, the slow left-arm bowler grassed the prized wicket of Dhoni in death overs. His bowling figures of 55 in eight overs illustrated the sort of a day the Nottinghamshire player had on the field on Friday.