Rahane: From here on it is only upwards for Afghanistan

Indian stand-in Test skipper Ajinkya Rahane said his team wanted to be ruthless, after they defeated debutants Afghanistan in two days in Bengaluru

Indian stand-in Test skipper Ajinkya Rahane said his team wanted to be ruthless, after they defeated debutants Afghanistan in two days in Bengaluru. At the same time, he also congratulated Afghanistan for their debut. India beat Afghanistan by an innings and 262 runs.

"This feels really special. It is always an honour to lead your country and we wanted to be ruthless," said Rahane after the match according to a PTI report. 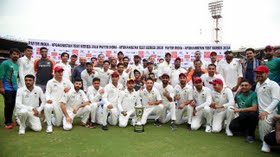 Rahane praised the openers Shikhar Dhawan and Murali Vijay, who scored centuries. "Guys like Shikhar and Murali Vijay got those hundreds, Rahul chipped in and Pandya was magnificent at the end. It was important for all of us to stick to our basics, create some good habits," he added.

Praising Afghanistan, Rahane said, "But credit to Afghanistan, they were fantastic. From here on it is only upwards and onwards for them. Their seamers bowled really well, especially in the third session yesterday and I am sure they will go a long way against all opponents.”