Rahul, Gayle slam fifties to hand Punjab a much needed win after last over drama

Punjab finally got their second win of the season with some solid batting performances from their skipper Rahul and comeback man Gayle, who smashed five sixes tonight. Chahal made things interesting by giving just a solitary run off the first five balls in the final over, but Pooran managed to guide them home.

It was an all Aussie opening contest at the start as Maxwell bowled with the new ball against his Victorian mate Aaron Finch, with Finch hitting a maximum in the last ball of the over. Finch continued to attack against Shami in the next over, and Devdutt Padikkal too joined the act. Arshdeep got rid of Padikkal, but Kohli caressed two boundaries in his first three deliveries.

After the batting powerplay got finished, Rahul attacked with spin for seven consecutive overs. Finch was struggling against leg spin, and Murugan Ashwin accounted for his wicket. Much to everyone’s surprise, Washington Sundar came to bat ahead of ABD and took his time to get settled. With Kohli too intent with ones and twos, Punjab spinners were running through their overs without giving much away. Feeling the pressure of strike rate, Sundar skied one off Ashwin to be caught by Jordan. Continuing to build on the mystery, Dube was sent ahead of AB and much like Sundar, he too took his time early on. The only difference being he was able to give back with a couple of huge sixes against Bishnoi, before perishing to Jordan in the 16th over. 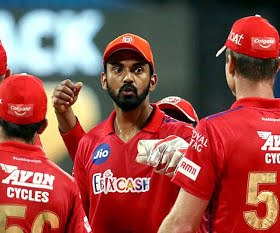 At 127-4, AB and Kohli were together and both were itching to tee off. That however, did not happen as Shami got both of the star batsmen out in the 18th over. Morris slogged the ball for sixes with ridiculous ease as 24 runs came off the final over and RCB finished at 171-6, with Morris contributing with a crucial 25*(8).

Rahul and Agarwal began really well in their pursuit of 172 with their usual approach, Agarwal being the aggressor, and the skipper playing second fiddle. Agarwal took on Chahal in the 4th over and amassed 14 runs off the leggie. Runs were flowing easily and Agarwal wanted to replicate the events of the 4th over in the 8th, but it wouldn’t happen as after a six, Chahal came back to bowl the batsman out.

Chris Gayle, who was playing his first IPL game this year, joined skipper Rahul at the crease. Batting at an unusual position of number three, he took a lot of time to get going, as he could manage only 6 runs off his first 14 balls. KL Rahul was going about his business in a very calm manner at the other end, and taking risks only when due.

At 88-1 after 11 overs, Rahul went after Siraj by hitting him for two sixes, and Gayle repeated the feat off Sundar the next over, thereby signalling that the “Universe Boss” had arrived. After a couple of quiet overs, both the batsmen targeted Siraj and slammed 20 runs off him to bring the equation down to a very gettable 26 runs in 24 balls. Both the batsmen got to their individual fifties and only 2 runs were needed off the final over. However, Punjab lived up to our expectations by creating undue drama as they could score only one run off the first five balls against Chahal and Gayle got run out off the penultimate ball ! Pooran however smashed the last ball for a six down the ground as Punjab finally got their much needed break.