Retired Sri Lanka great Muttiah Muralitharan has said there isn't much he can do for his compatriots as they struggle to come to terms with their dramatic first Test defeat against England.

Retired Sri Lanka great Muttiah Muralitharan has said there isn't much he can do for his compatriots as they struggle to come to terms with their dramatic first Test defeat against England.

The tourists were dismissed for just 82 in under two hours in Cardiff on Monday as England grabbed an unlikely innings and 14-runs win to go 1-0 up in the three-match series. 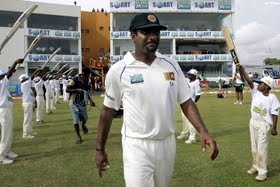 As well as Muralitharan, Sri Lanka's attack is also missing the likes of retired seamers Chaminda Vaas and Lasith Malinga, while pacemen Nuwan Pradeep and Dilhara Fernando were both forced out on the eve of the first Test because of injury.

But Muralitharan, due to play for Gloucestershire in this year's English county Twenty20 tournament, insisted he could not be swayed out of his decision to quit international cricket.

"I have finished my career and they have to handle themselves," the 39-year-old said Tuesday in an interview with Gloucestershire's website.

"The coach (former Australia batsman Stuart Law) is there and the captain (Tillakaratne Dilshan) is there and they have to handle themselves. I can't help them. I'm not there," said the spin legend.

"Cricketers go through these patches, but they come through. I just retired, I want to concentrate on my things. Sri Lanka are in good hands.

"Sometimes you have a disaster but that doesn't mean they're a bad side. They will bounce back."