Left-arm spinner Imad Wasim bowled splendid spell of 4 for 11, as Pakistan successfully defended a modest total of 136 in the first T20 against Zimbabwe at Harare on Sunday to keep their unbeaten record against the hosts intact in the format

Left-arm spinner Imad Wasim bowled splendid spell of 4 for 11, as Pakistan successfully defended a modest total of 136 in the first T20 against Zimbabwe at Harare on Sunday to keep their unbeaten record against the hosts intact in the format. While Shoaib Malik and Mohammad Rizwan scored 30 to give Pakistan something to bowl at, Zimbabwe’s batsmen did not show too much defiance. Hamilton Masakadza made 25 at the top and skipper Elton Chigumbura chipped in with 31 towards the end. But, it wasn’t enough for the hosts to get anywhere close to the target. 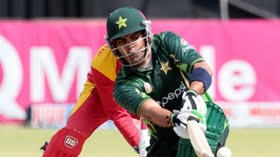 Wasim was in his elements right from the start, bowling round the wicket. He gave Pakistan the perfect start, cleaning up Chamu Chibhabha for a duck in his very first over. He later went on to dismiss Sikandar Raza for 13 in a unique fashion. He came down the pitch and was easily stumped, but the umpire adjudged him lbw. At the other end, Sohail Tanvir got the big wicket of Craig Ervine, who could not connect a flick, and was trapped in front of the stumps. Hamilton Masakadza accumulated 25 but holed out to Wasim, and the bowler got his fourth victim when he had Sean Williams lbw for 14.

At 66 for 5, the match was effectively over for Zimbabwe. Skipper Chigumbura’s presence gave them faint hope, but Richmond Mutumbami and debutant Luke Jongwe both were run out in single figures as Zimbabwe crumbled even further. Graeme Cremer also fell to Wahab Riaz first ball. Chigumbura hung around till the last over and hit a few lusty blows, including a six of Imran Khan. But, he perished off the first ball of the final over. Even though Prosper Utseya got a quick 12, Zimbabwe fell 13 short.

The hosts in a much more positive mood earlier in the day, when they reduced Pakistan to 29 for 3. Chibhabha was deadly early on, bowling a tight line and length. He claimed the first three wickets to fall, cleaning up Ahmed Shehzad for 17 in the fourth over, and then strangling Mukhtar Ahmed and Sohaib Maqsood as well, one was out caught, and the other bowled. Malik and Umar Akmal then featured in the first rescue act for Pakistan. They added 42 in close to six overs to give the Pakistan inning some impetus. Umar holed out against Cremer on 14.

Malik was more combative. He slammed Cremer for a six and made 35 before being bowled by Williams. Zimbabwe could have had Pakistan in greater trouble had Mutumbami stumped Mohammad Rizwan. As it turned out, Zimbabwe was left to rue the missed chance. Rizwan hit out against the spinners, even smashing a six off Raza. He and Wasim, who blasted 19 from 12, added 46 from 4.4 overs. Rizwan remained unbeaten on 33. Zimbabwe conceded only nine in the last two overs, but as far as the game was concerned, the damage was already done.