Australian fast bowlers have the ability to trouble India

The first batch of Australian players have left for India to get accustomed to the conditions even as the others battle it out at home in the one-dayers against the West Indians. Normally, the spinners are expected to play a big part in the sub-continental conditions.

The first batch of Australian players have left for India to get accustomed to the conditions even as the others battle it out at home in the one-dayers against the West Indians. Normally, the spinners are expected to play a big part in the sub-continental conditions. But, Australia have the pace bowlers to trouble India in the latter’s den as well. Remember, while England’s spinners gave a tough time to the Indian batsmen, the performance of their pacemen, in particular James Anderson, was also significant in the Englishmen securing a historic win. Anderson used the new as well as the old ball to great effect, and always kept the Indian batsmen under pressure. 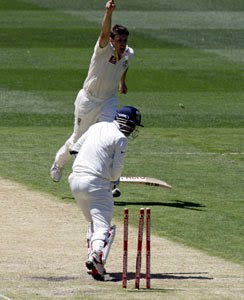 Australians have the fast bowlers, who could put India in real trouble. It will help that they got the better of the Indian batsmen during the 4-0 drubbing they handed out to M S Dhoni’s men in the series played in Australia. Even though Ben Hilfenhaus, who troubled the best of Indian batsmen, is not on this tour, there are others who are more than capable of making an impression on the Indians. If they manage to do so, India could find themselves in real trouble.

Among the bowlers on the upcoming tour, James Pattinson has the pace to unsettle the Indians. The fact that the Indian batting line-up is at its lowest ebb will only aid Pattinson in his endeavour. Of course, the job wouldn’t be as easy for Pattinson as it was in Australia, since the pitches in India wouldn’t be as conducive to pace bowling. Still, India’s weaknesses against the quick ball have been exposed even at home in the recent past. With the batting line-up not as strong as it used to be a few years ago, Pattinson’s raw pace might just be what Australia might savour on this tour.

Left-arm seamer Mitchell Starc has troubled the best of Indian batsmen in the previous series between the two sides. He would look to carry on with the good work in this clash as well. It would be a challenge for the Aussie speedster since he would have to prove his credentials in alien conditions. At the same time, he can take confidence from the fact that England’s faster men got a lot out of the Indian pitches that were supposed to assist spin prodigiously.

Apart from the abovementioned names, Mitchell Johnson and Peter Siddle have the experience of playing in India before, so there would be lesser pressure on them. Also, both Johnson and Siddle are proven performers, who have been in good form of late, so they should be confident of giving the struggling Indian batting line-up a tough time. Spinners Nathan Lyon and Xavier Doherty don’t have proven credentials in Tests as yet. Thus, it would be interesting follow their growth through the tour.

All in all, India aren’t invincible at home anymore, which will give Australia the confidence to do well in spite of their lack of experience given the conditions.