Can Sri Lanka get it right at Pallekele?

The series may have been lost but Sri Lanka would still like to win the final ODI and reduce the gap between the two teams. The home team had more than one opportunity to get the better of India in the last two games.

The series may have been lost but Sri Lanka would still like to win the final ODI and reduce the gap between the two teams. The home team had more than one opportunity to get the better of India in the last two games. However, India were successful in coming up trumps on both occasions, and Sri Lanka were left to ponder upon missed chances. Lanka would be buoyed considering the fact that India haven’t played at Pallekele, and also that the visitors have struggled when the ball has moved around a bit. The conditions during the fifth ODI are likely to be similar to those mentioned above. That will give Sri Lanka their best chance of upsetting India. 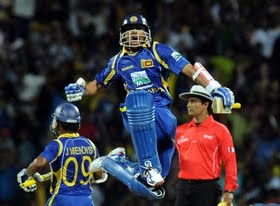 In case the ball doesn’t do a lot, India will definitely hold the edge again -- this is because most of their batsmen have been among the runs. Gautam Gambhir, Virat Kohli and Suresh Raina have been lynchpins of the Indian batting in this series, and if Lanka do not get them early on Saturday, they will be on the back foot again. On the other hand, if they can restrict the in-form trio, Sri Lanka’s chances of doing well will be augmented. This is because VirenderSehwag has been patchy apart from his 96 in the first ODI. And, of Rohit Sharma, the less said the better. He will be lucky if he gets another chance on Saturday. However, with India already having claimed the series, there is a decent possibility that he will play.

The bigger worry for Sri Lanka was their batting effort against the part-time spinners in the last one-day match. Manoj Tiwary picked up four wickets, and was only taken for a few big sixes in his last two overs. Sehwag also picked up a key wicket and kept things tight. Lankan batting’s lack of penetration against the part-time bowlers was what encouraged M S Dhoni to prefer them over the regular bowlers even in the death overs. Tiwary, in fact, bowled the last over of the innings. It was another matterthat he went for 18 runs.

Lanka’s overall batting approach was also disappointing. With Kumar Sangakkara out, a lot depends on Tillakaratne Dilshan and Mahela Jayawardene. Apart from them, Dinesh Chandimal and Lahiru Thirimanne have struggled to come up with the goods. All-rounders Angelo Mathews and Thisara Perera also need to make some runs. They must find a way to deliver else Lanka will India will be on their way to a hat-trick of victories.

Lanka’s poor fielding has been symptomatic of their underperforming efforts. A good fielding effort could be their first effort towards resurrection.