Win and stay alive: The equation for Pakistan

Make no mistake. Pakistan have been the second best team in the tournament so far, next only to the ruthless Australians.

Make no mistake. Pakistan have been the second best team in the tournament so far, next only to the ruthless Australians. However, they might still not make it to the final four following their horror outing against India. Not only has the embarrassing loss made it a must for Pakistan to beat Australia, but they need to get the better of them rather convincing to be on the safe side. If not, they need to hope that South Africa beat India for them to go through. The disadvantage for Pakistan would be that they would be playing their match before the India-South Africa clash, as a result of which they wouldn’t be aware of their fate until the match between India and South Africa concludes. 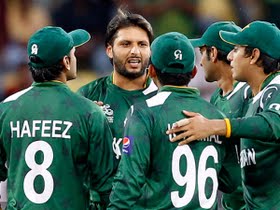 There is no such pressure as far as Australia are concerned. The only way they can be knocked out is if Pakistan give them a thumping similar to the one they gave India. Also, India then need to beat South Africa handsomely for them to go ahead of Australia on the basis of the net run rate. On current form, and looking at India and Pakistan’s inconsistent ways, that seems as remote a possibility as Richard Levi scoring runs against Saeed Ajmal and Xavier Doherty. Given the way they have dominated opponents, Australia will be keen to make their way in to the semis on a high.

As evident from the margin of defeat against India, eight wickets, Pakistan committed quite a few mistakes in the important game. It will be mandatory for them not the repeat the same against a rampant Australian outfit. The captain himself was one of the culprits in the match against India. He blocked way too many deliveries for a T20 game, as a result of which the innings got stuck after a flowing start. Apart from Hafeez, the performance of Imran Nazir and Nasir Jamshed would be extremely critical. Even though the middle-order is filled with stroke players, Nazir and Jamshed are the form players, who have played major roles in getting Pakistan this far. Promoting Shahid Afridi again wouldn’t be a bad move, but one wonders whether he’s good enough to tackle the Aussie pacers.

Pakistan have great variety in their bowling, with young left-arm spinner Raza Hasan turning out to be impressive and Saeed Ajmal, of course, continuing to mesmerise. Spin is one area where Pakistan would look to expose Australia. At the same time, the faster men in Umar Gul and Yasir Arafat also need to do a job, else there wouldn’t be any pressure on Australia’s Shane Watson-led batting line-up.

Australia’s biggest strength in the tournament is possibly their only weak link. Yes, all-rounder Watson has single-handedly led the charge for his side, especially with the bat. David Warner slammed an aggressive half-century against India, but otherwise, it has been a Watson show with the willow. It might reek of negative thinking, but the question Australia might be asking themselves deep down could be -- what if Watson fails with the bat? Can the rest carry the responsibility as well? They might probably be praying for Watson’s good run to continue all the way till the final.

As for bowling, Xavier Doherty put in a wonderful showing against South Africa, following which it would make no sense to drop him. And in case the Aussies decide to play one spinner, 41-year-old veteran Brad Hogg might be the one to miss out. It would be a tough decision as well since even batsmen from India found it hard to read him. As for pace, Pat Cummis and Mitchell Starc would be keen to continue their good showing.

Finally, if Pakistan need inspiration, here’s one –they have never failed to reach the semi-finals in three editions of the World T20 held till date.