Former Indian skipper MS Dhoni recently visited the Virender Sehwag International School, and shared tips on studies and sports with the students of the school

Former Indian skipper MS Dhoni recently visited the Virender Sehwag International School, and shared tips on studies and sports with the students of the school of one of India's greatest openers. 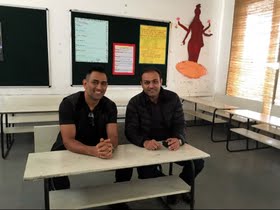 Dhoni advised students that though having fear of failure is quite understandable, and important as well, but one should keep work as hard as possible irrespective of the adversity one is facing.

Giving his own example he said, "If I don’t get selected for a match, I don’t get worried because I know that selection is not my job. It is someone else’s job. It is not in my control. But the number of hours I put in to training, the number hours you put into studying, that is in your hands.”

Apart from imparting wisdom, Dhoni also stepped on to the field, and gave some wicket-keeping tips to the kids. After all, he is recognised among the smartest keepers to have graced the game.

During his last year's in international cricket, there were unconfirmed reports of all not being well between Dhoni and Sehwag. Looking at their camaraderie, that certainly doesn't seem to be the case.