There is just one match on Thursday but it promises to be a mouth-watering contest between two Indian origin teams – the Chennai Super Kings and the Sunrisers Hyderabad.

There is just one match on Thursday but it promises to be a mouth-watering contest between two Indian origin teams – the Chennai Super Kings and the Sunrisers Hyderabad. This Group B Match will be played at Ranchi, the hometown of India and CSK Skipper MS Dhoni. It is easy to predict which team the spectators are going to support between the CSK and the Sunrisers.

Both Chennai Super Kings and the Sunrisers Hyderabad go into this match having won their first game. CSK had chased down a high target against the Titans four days back at this same venue. Dew played a major factor during that match as the CSK batsmen effortlessly chased the big target.

Sunrisers Hyderabad, who have qualified in this main tournament with two wins out of three matches in the Qualifier, had a thrilling 4-wicket win over a tough Trinidad & Tobago. That match was played at Mohali on a track that was conducive for seam bowling. Sunrisers having clinched victory from the jaws of defeat will be looking to cause an upset tonight against the Chennai Super Kings. 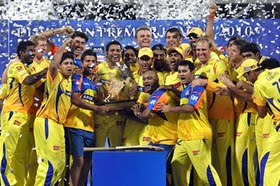 MS Dhoni’s team is considered as the best team of the tournament with plenty of batting fire power. It is their bowling which needs to fire but it may not be easy on grounds that are facing excessive dew.