Having already got its morale shattered with two embarrassing defeats in the series, Team India faces yet another challenge on its down under tour.

Having already got its morale shattered with two embarrassing defeats in the series, Team India faces yet another challenge on its down under tour. A deadly fast pitch is awaiting the tourists at the WACA Ground in Perth for the Third Vodafone Test. The WACA has been known to be the fastest pitch in the World for years! This time too, the Curator of the WACA pitch Cameron Sutherland promises the same pace and bounce in the track.

On slightly slower pitches at Melbourne and Sydney, the Indian batsmen had struggled to come in terms with the Australia pace trio of Pattinson, Hilfenhaus and Siddle. On this basis, the Indian batsmen will have to face lots of chin music at a much quicker and bouncier pitch at the WACA in Perth! 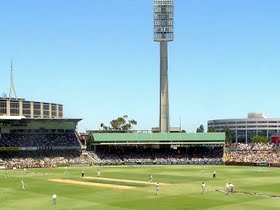 The curator of the WACA Pitch - Cameron Sutherland suggests that the pitch for the 3rd Test will be similar to the one that was used in last Ashes in which Australia defeated England by 267 runs. Mitchell Johnson and Ryan Harris, the then Australian fast bowlers demolished the Englishmen in the pacy and bouncy conditions in that Perth Test. The Curator predicts that the new ball will do enough off the deck but once the shine goes off, the pitch will turn out into a good batting strip for the Third Test between Austalia and India.

With the WACA Pitch expected to be a fiery one for the Indian batsmen, hosts Australia are all set to go in with four quick bowlers. Ryan Harris and left-armer Mitchell Starc are expected to replaced the injured James Pattinson and off spinner Nathan Lyon. So far out of the 40 wickets that India has lost in the series, 37 of them have been taken by the Australian pace trio.