CLT20 Result: Warriors win by 3 Wickets vs RCB in a thriller

In a nail-biting finish, Warriors of South Africa on Friday beat home team Royal Challengers Bangalore (RCB) by three wickets in the opening tie of the ICC's Champions League T20 at the Chinnaswamy stadium here. 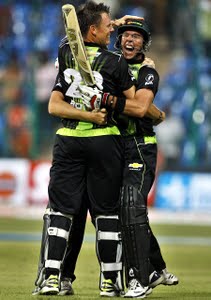 In a nail-biting finish, Warriors of South Africa on Friday beat home team Royal Challengers Bangalore (RCB) by three wickets in the opening tie of the ICC's Champions League T20 at the Chinnaswamy stadium here.

Chasing a modest target of 173, Warriors cruised to victory on the last ball of the last over by scoring the winning two runs for the loss of seven wickets.

Warriors were in doldrums at 82 for four in the 12th over. But man of the match Prince, played a gutsy knock to steer his side to a stunning victory in front of 20,000 RCB supporters at the Chinnaswamy Stadium.

He found an able ally in skipper Johan Botha (42 from 24 balls) to produce a match-winning fifth-wicket partnership worth 73 runs in barely 39 balls.

The fortunes swung wildly as RCB fought back with the important wickets of Prince and Botha. With 13 needed off seven balls, Boje swung AbhimanyuMithun for a cracking six over mid-wicket. But when Botha fell with Warriors needing eight runs from three balls, RCB were seemingly in charge. But Wayne Parnell, who walked into the cauldron, made light of the gripping tension, scoring the winnings runs.

Earlier, Rusty Theron bowled beautifully and made his mark in the Champions League as his four wickets restricted the Royal Challengers Bangalore to 172 for eight.

Theron delivered an extraordinary penultimate over - taking three wickets and conceding just six runs - as the Challengers slid from 158 for five.

Warriors had won the toss and sent Bangalore in to bat, with West Indian swashbuckling batsman Chris Gayle exploded from the word go with two fours and two sixes withing six balls.

The introduction of left-arm seamer Wayne Parnell picked up the Caribbean left-hander, as Gayle tried to slap a slower delivery over mid-on, but Johan Botha took a fine tumbling catch running backwards.

ViratKohli (34) and AB de Villiers (31) added a quickfire 52 in 6.5 overs, both looking in fine touch before paceman Theron returned from an unsuccessful first over, which cost 14 runs, to have Kohli caught by Parnell at deep midwicket.

De Villiers would be the loser in his battle with Proteas captaincy rival Botha as the off-spinner had him caught at deep backward square, but SaurabhTiwary quickened the pace of the innings with his 28 off 15 balls.

But Theron, as ever, was hard to get away in the death overs, ensuring the Warriors will be the happier side at the break after a ding-dong battle between bat and ball.

Ashwell Prince, Parnell and LonwaboTsotsobe did well to block out the noisy home crowd and take good boundary catches to remove Daniel Vettori (8), Mohammad Kaif (26) and AbhimanyuMithun (4) in Theron's excellent penultimate over and Parnell then did extremely well to concede just eight runs in the final over.

Tsotsobe, after a good opening over in which he dismissed opener Mayank Agarwal for a duck, was expensive, conceding 31 runs in his three overs.