Usman Khwaja to play for Sydney Thunder in Big Bash 2012 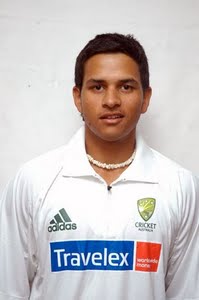 The Thunder announced on Saturday the 24-year-old would join the likes of David Warner and Chris Gayle in playing for the side in the upcoming revamped Twenty20 competition.

It completed a bizarre turn of events after officials from the Scorchers were forced to backflip on claiming they had signed the player on Friday, The Sydney Morning Herald reports.

The WACA believed it had reached an agreement with Khawaja's management on Wednesday that the 24-year-old left-hander would line up for the Scorchers in the revamped Twenty20 tournament.

However, his management communicated to the WACA that Khawaja was still considering his options and likely to join another BBL team closer to his Sydney home.

WACA cricket manager Andrew Scotford said there had been a "miscommunication" with Usman before his departure to Zimbabwe to join the Australia A tour.