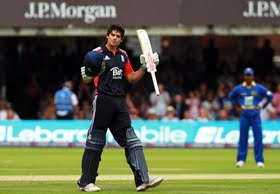 England's win at Trent Bridge here on Wednesday squared the five-match series at 2-2 heading into Saturday's finale at Old Trafford.

Cook, England's new permanent one-day captain, didn't even make the squad for the World Cup in the sub-continent earlier this year on account of the left-handed opener being supposedly too slow a run-scorer for the one-day game.

But at Trent Bridge the 26-year-old made his runs in just 75 balls with 16 fours as he and Craig Kieswetter (72 not out) shared a new England record partnership for any wicket against Sri Lanka of 171.

Cook's innings followed his career-best 119 during England's six-wicket defeat at Lord's on Sunday. "It's very rewarding, for all the hard work I've been putting in," Cook told reporters. "I've always known I can play the one-day game; it's just a matter of trying to prove it to people.

"If I can keep batting like that, at that tempo -- which I've shown this series -- it holds me in good stead."

Sri Lanka annoyed England by effectively delaying their victory at Lord's so as Dinesh Chadimal could get to a hundred.

But the 26-year-old Cook insisted he had no problems with the big-hitting Kieswetter preventing him recording his second straight century. "He did ask, which is fair enough," Cook said. "But this is the way we want to play our cricket, and proves that the team is always more important than those personal milestones.

"He just said 'shall I look for ones, or hit a six?' So he hit a six. When you win by 10 wickets and play as well as that, it doesn't get much better," Cook added.

England's victory was all but assured after they dismissed Sri Lanka for just 174 -- their target was reduced to 171 when rain meant two overs were lost from the second innings.

It was the kind of surface rarely seen anywhere in modern international cricket, with the majority of pitches closer to the kind of dry sub-continental track on which eventual losing finalists Sri Lanka beat England by 10 wickets in a World Cup quarter-final in Colombo in March.

"When we saw the pitch, it was exactly what we asked for, the groundsman (Steve Birks) can take a lot of credit for that," Cook said.

"It was very brave to leave that much grass on for us. I think it was very clear we had to play four seamers."

However, Cook insisted the ball had not deviated wildly off the wicket. "I thought that pitch was as flat as I had played on, it came on to the bat very nicely. It was just that first few overs with the white ball, it did a little bit. It was just the carry. I think the Sri Lankans looked at it and thought it might have done more than it did."

"A lot's been made of this wicket, but the way we played at the end proves it's the best we've played on in these four games."

Sri Lanka captain Tillakaratne Dilshan paid tribute to Anderson after falling to the swing bowler in the first over of the match for a duck. "He bowled really well, and used the conditions. They took three wickets in the first six overs, and it pushed us back after that."

However, Dilshan added: "If we get runs on the board, we can win the next match and the series."