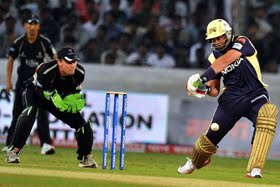 Chasing a competitive 162 runs to win, Somerset lost their first wicket with just 15 runs on the board, but the incoming van derMerwe took the attack to the opposition from the word go.

The explosive right-handed batsman hit nine fours and two massive sixes in his power-packed knock. He reached his fifty off just 25 balls, which was the third fastest fifty in all Champions League Twenty20 matches. He was ably supported by Peter Trego (28 off 35 balls) and the two added 105 runs for the second wicket.

Somerset’s run chase did hit a roadblock when they lost Trego and van derMerwe in one over, followed by the loss of James Hildreth and ArulSuppiah in quick succession.

Shakib Al Hasan first ran out Trego with a direct hit and then took an easy return catch to dismiss van derMerwe.

However, Nick Compton and Steve Snell held their nerves to guide their team to victory with two balls to spare.

Earlier, a vintage knock by Jacques Kallis (74 off 61 balls) and a whirlwind innings by YusufPathan (39 off 21 balls) helped KKR post a competitive 161/3 in their 20 overs.

The South African all-rounder reached to his fifty in 44 balls.

The 36-year-old also put on a 50-run stand with ManojTiwary after young Lewis Gregory dismissed opener ManvinderBisla and returning captain GautamGambhir in one over to jolt Kolkata.

Gregory gave Somerset an early breakthrough when he had Bisla caught by Compton at square leg in the third over.

The breakthroughs came after Gambhir won the toss and chose to bat.