Defending champions Mumbai Indians would be raring to kick off their CLT20 campaign with their clash against the underwhelming Lions squad. Although man to man, Mumbai have a much stronger side, Harbhajan Singh’s men have every reason not to take the Lions lightly, for they are one side that have consistently underperformed in the IPL despite having the best of resources. The CLT20 triumph was a mere reiteration of their talent. As for Lions, this is a great opportunity for them to prove a point. Not a lot would be expected of them considering the thin resources they possess, but anyone can emerge winner on a given day in T20. 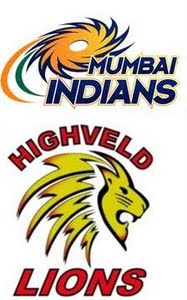 There is no dearth of performers in the Mumbai squad, either in the batting or bowling department. Richard Levi may not have had a great World T20, but playing at home should aid him in putting up better performances. And if gets his act right, the opener could be quite a handful. Then of course, there is Sachin Tendulkar, who would be keen to prove that he still has something to offer in T20s at 39. Apart from the duo, Mumbai would rely a lot on the big hitting skills of Kieran Pollard, the talent of Rohit Sharma and the determination of Dinesh Karthik. Ambati Rayudu, Thisara Perera and Dwayne Smith are other names in the Mumbai batting order that inspire confidence.

If their batting cupboard is brimming with gifts, the bowling isn’t far behind. Lasith Malinga is as good a T20 bowler as one gets. Very rarely does he have off days – World T20 final was sadly one such instance. Malinga would be keen to put that nightmare being him. In his endeavour, he should find backing from Harbhajan, Pragyan Ojha, Mitchell Johnson and Munaf Patel as well.

Unlike the Mumbai Indians, the Lions do not have a highly gifted squad. In fact, it wouldn’t be wrong to say that they do not have a single big name in their midst. Most of the players who have played for their respective countries are past their prime. Neil McKenzie, for example, last represented South Africa in 2009. The others also have similar biographies. Dirk Nannes was part of Australian cricket for a very brief while and Zander de Bruyn never really made an impact for the South Africa side.

The visible downside with the Lions squad is that most of their members are on the wrong side of their 30s. McKenzie is 36, de Bruyn 37, Nannes 36 and Gulam Bodi 33. The other members of the team are pretty much unknown quantities. Alviro Petersen is beginning to make his presence felt as a Test player, but it remains to be seen what he has to offer in T20s. In the absence of big names, the responsibility of leading the bowling attack would rest with Sohail Tanvir.

All in all, Mumbai would be embarrassed it they don’t overcome the Lions challenge on Sunday.