Back
I backed myself against Rahul: Jasprit Bumrah

Mumbai Indians stayed in the hunt for a play offs spot in IPL 2018 thanks to a spectacular bowling effort by Jasprit Bumrah who claimed 3 for 15 as MI stalled Punjab by 3 runs, despite another splendid knock of 94 by KL Rahul.

“Clarity is very important when you bowl at the death. That’s what I look for. When I’m clear, it’s easier to execute. Plans don’t change at the last moment, when you run in. If you’re changing at the last moment, that means you’re not clear. On a bad day a batsman could hit you, but you have to execute your plans,” said Bumrah post the match 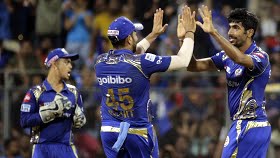 Talking about the tussle with Rahul, Bumrah added, “He’s batting really well since the start of the season. Difficult to bowl to someone like that. But I backed myself. Knew his wicket was very important. On this wicket, slower ball was not gripping that much from a good length due to the dew. So I was trying to bowl the dipper and I was able to execute so it was a good day.”

KXIP skipper R Ashwin was expectedly distraught. “Pretty blank at this point of time. We were in the chase all along. Pretty professional batting effort compared to the last few games, but didn’t work out for us today. It looked like it would be a clinical romp for us, but Bumrah bowled really well at the death, and proved himself once again at the death,” he said.