Latest News
• Rishabh Pant has his own style of batting, but gets the job done: Rohit Sharma 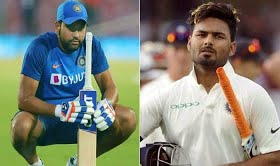 Team India opener Rohit Sharma has stated that Rishabh Pant can continue to bat the way he wants as long as he is doing the job for the team. He also requested critics to cut Pant some slack for his failures. The left-hander smashed 101 from 118 balls as India ended Day 2 of the Ahmedabad Test at 294 for 7, with a lead of 89.

• Why should we discuss what they are saying: Sunil Gavaskar on foreign pitch critics

Former India captain Sunil Gavaskar has opined that over-importance must not be given to foreign players, who have been criticising the surfaces being used for the ongoing India-England series. According to Gavaskar, these ex-players are only getting publicity by raking up pitch controversies.

• There is always too much noise over spinning tracks: Virat Kohli

Indian captain Virat Kohli stuck to his stance of defending the pitch used for the day-night Test. The pink-ball Test between India and England ended in under two days, with India winning by 10 wickets. In the following days, there has been numerous criticism about the pitch. While the Indian team has stuck to its guns, a number of former cricketers, particularly from England, have been critical of the surface.

• Check your facts, I am a team man: Ajinkya Rahane responds to criticism on lack of runs

Ajinkya Rahane has refuted criticism that he has not scored enough runs for the team of late. According to him, he is a team man, and has contributed whenever the team has needed him to. The Indian vice-captain, who scored a match-winning hundred in Melbourne while leading the team, has struggled for form since. In the ongoing Test series against England, he has only one half-century to show for his efforts.

Ever since the pink ball test between India and England ended in just a couple of days, there has been plenty of talk around the pitch being too spin friendly and completely alien to the tourists. Facts do support this talk, as 28 out of the 30 wickets that fell in this test match belonged to spinners. Neither of the team managed to cross 150 as India were set a paltry target of 49 in the fourth innings to win the test and knock England out of contention of the World Test Championship, which they did without breaking a sweat.

• Thinking about bringing Ahmedabad curator to the SCG: Nathan Lyon

Australia off-spinner Nathan Lyon has backed Indian counterpart Ravichandran Ashwin over the ongoing controversy related to the pitch in Ahmedabad. There has been a raging debate over the nature of the surface after the India-England pink-ball Test ended in under two days, with spinners from both sides running riot. A number of former England cricketers including Michael Vaughan and Monty Panesar have hit out at India over the pitch prepared for the third Test.

• Who defines what a good surface is? Ravichandran Ashwin hits pitch critics for a six

With the debate around the pitch refusing to end, Indian off-spinner, Ravichandran Ashwin, on Saturday, hit out at critics, stating that the pitch talk was getting out of hand. The Ahmedabad pitch used for the pink-ball Test has been in focus after the match ended well inside two days. However, according to the Indian off-spinner, the debate should focus around the performance of players and not the pitch, which, according to him, is being stretched beyond limit.

• I am actually a cricket lover who went on to become a cricketer: Ravichandran Ashwin

Veteran Indian off-spinner Ravichandran Ashwin, who became the second fastest bowler to claim 400 wickets in Tests during the Ahmedabad game, has stated that he was actually a cricket lover who became a cricketer by accident. Ashwin picked up seven wickets during the pink-ball Test against England, which India won by 10 wickets, and now has 401 wickets to his name.

• Pitch didn't do anything, most batsmen got out to straighter deliveries: Rohit Sharma

Indian opener Rohit Sharma refused to blame the Ahmedabad pitch after the hosts defeated England by 10 wickets in the third Test of the four-match series. Resuming at 99 for 3, India were restricted to 145 in their first innings as Joe Root claimed a five-for. Axar Patel and Ravichandran Ashwin, however, combined to claim nine second innings wickets as England were rolled over for 81. India got home with 10 wickets to spare in the chase of 49.