There was no third time lucky for India as they batted first again at Melbourne, this being asked to, and put up another impressive total, which they could not defend. There has been an eerily similar pattern to India's defeats in all three matches so far

There was no third time lucky for India as they batted first again at Melbourne, this being asked to, and put up another impressive total, which they could not defend. There has been an eerily similar pattern to India's defeats in all three matches so far, which has cost them the series. In spite of being in a great position at the halfway mark, they have failed to finish off strongly with the bat. And while defending, their weaknesses and inexperience have clearly come to the fore. It hasn't helped that India's fielding has been well below par, especially in the last two games, where they have dropped sitters. 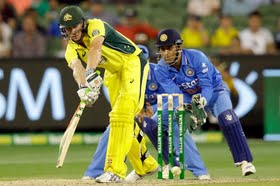 India were always going to struggle unless they found solutions to two major issues hounding them in the build up to the series -- their late overs batting and their pedestrian bowling. If you look at the three matches played so far, Rohit Sharma got hundreds in the first two matches while Virat Kohli has registered two fifties and a ton. Also, Ajinkya Rahane has scored two quick half-centuries in the last two matches. Yet, India haven't been able to get close to even 330, a par score under the modern rules, leave alone 350. They are clearly missing big hitters like Yuvraj Singh and Suresh Raina. MS Dhoni blasted a few at Melbourne, but it came too late.
India's strike rotation has also been slack as compared to the Aussies. The struggling Shikhar Dhawan did come up with a half-century on Sunday. But, while he should be given some leeway for getting his eye in, he lacked the skills to turn the strike around and give it to the in-form batsman at the other end. Once he consumed the number of deliveries that he did, he should have carried on to get a hundred. Instead, his laboured 68 saw India's run rate dropping steadily, putting pressure on the others. And so, in spite of the best efforts of Kohli, Rahane and Dhoni India couldn't reach 300.
As Dhoni admitted at the post match conference, India are lacking impact players, who can make a difference with the bat and ball. At Melbourne, Australia had Glenn Maxwell and James Faulkner, both of whom made significant contributions with both bat and ball. In contrast, India were forced to field two debutants in Gurkeerat Singh and Rishi Dhawan, both of whom were two green to make any sort of impression on the solid Australians. In the field as well, the Aussies expectedly out did India, as they did when it came to running between the wickets. When not getting boundaries, the hosts ensured the supply of two and threes came frequently.
What is most disappointing about India's bowling is that they do not have a completely inexperienced attack. Ishant Sharma has been around for ages. And while he is beginning to find some sort of form in Tests, the same cannot be said about his ODI performances. The sad part is that he is the leader of the pack. Umesh Yadav, on the other hand, has failed to achieve the consistency expected of him in spite of being given repeated opportunities. Barinder Sran had a memorable debut, but has since been figured out. India have tried various combinations over the three ODIs, but nothing has worked. In a nutshell, they just haven't been good enough.
-- By A Cricket Analyst