If I do well against Pakistan, it will probably put my case forward: Jofra Archer on World Cup hopes

Jofra Archer may not have been selected as part of England's 2019 World Cup squad but has said that he is not thinking about the same and wants to take it one game at a time against Pakistan in the ongoing series.

Jofra Archer may not have been selected as part of England's 2019 World Cup squad but has said that he is not thinking about the same and wants to take it one game at a time against Pakistan in the ongoing series.

It may be noted here that teams are allowed to make changes to their preliminary 15-member squad till the May 23 deadline. So there are chances that Archer could still make it if he puts in impressive performances against Pakistan. 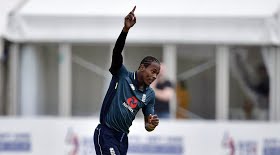 "It's game by game, I'm not thinking too far ahead," he said. "If I do well here, it will probably put my case forward. But I'm not focusing on the World Cup spot. Anyone would think about it.

"But just play well here and hope. I'll try not to set my heart on it. Obviously, the guys have been together a long time and they probably do deserve it, so I won't feel too bad if I'm left out," Archer was quoted as saying in an ICC report.

Archer, who made his ODI debut for England against Ireland on Friday, finished with 1 for 40 from eight overs. He stated that he had expected his England debut would come so soon.

"It's done now. I'm here," he said. "It happened a bit quicker than I expected – I had my eyes set on 2023 and to be given the opportunity so early is really exciting. I'm here with a great team at a great time," he further said in the ICC report

For those uninitiated, Archer was born in Barbados but holds a British passport. He got a place in the England team after ECB changed their eligibility criteria. There are mixed reactions over his possible inclusion in the England squad for the World Cup.