New Zealand came to India as underdogs. They were the second best in a drawn game against Mumbai, which gave early indications of the fact that they may struggle

New Zealand came to India as underdogs. They were the second best in a drawn game against Mumbai, which gave early indications of the fact that they may struggle. One practice match clearly wasn’t enough to set them into motion. And, their lack of adaptability under the conditions came to the fore at Green Park in Kanpur. There were sessions where they definitely gave India a close run, and even won some in the first half of the match. As such, they should be proud of their effort, particularly since they have a relatively inexperienced squad. They can be expected to get better from here.

There were a few notable efforts from New Zealand even in the loss. All-rounder Mitchell Santner stood out without an iota of doubt, making an impression with both bat and ball. Santner grabbed attention while at the crease with the willow, for the ability to get to the pitch of the ball, and time strokes effectively, particularly against the spinners, and was rewarded with runs. For someone coming from New Zealand, it was a striking feature for sure. Santner was among the wickets with the ball as well, and he got scalps with good balls. His five victims were deserved claims. 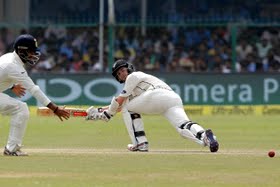 Following his success in the practice match, New Zealand were confident enough to go in with Luke Ronchi as a specialist batsman ahead of Henry Nicholls. And, Ronchi did not disappoint. He batted with positive intent in both the innings, and his second innings 80 was actually the highest individual score in the match, an indication of how well he played. It would be unfair to point flaws in Ronchi’s game, particularly considering that no one from India as well got to three figures. But, Ronchi can definitely work on his shot selection, as it can lead to him performing even better.

One big talking point going into the Kanpur Test was whether New Zealand should continue with Martin Guptill at the top of the innings. He has struggled in the format in recent times, and doesn’t seem to have the game to succeed in the sub-continent. His twin failures mean the pressure will only grow on him. If at all New Zealand decide to drop Guptill, Ronchi might have to move to the top, with Nicholls coming in instead of him. The lack of runs from Ross Taylor against the bigger teams in recent times will also worry the Kiwis.

In the bowling department, New Zealand have been dealt a big blow with the loss of Mark Craig due to injury. The Kiwis had already lost Tim Southee to injury before the start of the series, and this only makes matters worse. Santner has done well, but the absence of Craig, who can hold one end up, will put additional pressure on Ish Sodhi to deliver. Trent Boult and Neil Wagner gave it their everything at Kanpur even though the results were not always in their favour. Despite the loss, Kiwis’ fighting spirit remains intact.