The World T20 is only a month away, and with the Indian players not taking part in the Sri Lankan Premier League (SLPL), this will be their best chance to get a taste of T20 cricket in Sri Lanka, although a solitary game shouldn’t make too much of a difference. The last time India played in Lanka was in 2009, which the visitors won. After having dominated the ODI series, they would be keen to end the tour on a high, with a convincing performance in the sole T20 at Pallekele. As for Sri Lanka, they would be hoping that the change in format also brings about a shift in their fortunes as well.

Sri Lanka’s key wicket-taker bowled himself into some form against India in the final ODI. He would be keen to continue the good work on Tuesday. While Malinga doesn’t possess a great record against India in ODIs, his experience in the IPL makes him a lot more potent weapon in the T20 format. He knows the game of most Indian players in this format inside out, having played with and against them over the past few seasons in India’s domestic cash-rich league. However, the reverse is also true. It would be interesting to obverse who goes one up on whom at Pallekele.

With Virender Sehwag flying back home with a glute problem, Ajinkya Rahane will get his opportunity to open the innings. The stylish bat has surprised many with his performances in the IPL this year. All of his successful knocks during the tournament were built with the help of proper cricketing shots. More significantly, he scored his runs at a fast pace, meaning the team never suffered even if he didn’t go for the slog, which many consider a must in this version of cricket. At Pallekele, Rahane will get a chance to prove his worth again. He has done well for India in the format in the recent past, so even if he fails in the game on Tuesday, it shouldn’t matter much. Still, a solid innings would be the perfect recipe as far as Rahane is concerned.

They need to fire 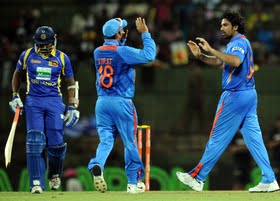 Even though Rohit Sharma has done nothing of note in the five ODIs, India, in all probability, will play him again on Tuesday. The decision is made easier by the fact that India have a strong batting line-up, and also considering that most of the visitors’ batsmen are in form. Gambhir, Raina, Kohli and Tiwary. You name them, and they have got runs. In the bowling department, India have been weakened by the loss of Zaheer Khan. As such, Umesh Yadav and Ashok Dinda will have to step up.

As for Sri Lanka, they will be without Kumar Sangakkara, which means it will be all the more important for Dinesh Chandimal to fire. The Lankan bat did not do much in the ODIs, but has the ability to turn things around.