ZIM vs IRE 3rd ODI Review: Medium pacer Tim Murtagh claimed four wickets and then made a crucial 19 not out as Ireland stumbled their way to a consolation two-wicket victory over Zimbabwe at Harare in the dead rubber on Tuesday.

Medium pacer Tim Murtagh claimed four wickets and then made a crucial 19 not out as Ireland stumbled their way to a consolation two-wicket victory over Zimbabwe at Harare in the dead rubber on Tuesday. Chasing 188, Ireland were cruising at one stage and were only three wickets down when they went past the 100 mark. But, some excellent bowling by the spin duo of Wellington Masakadza and Tino Mutombodzi kept up the pressure on Ireland, as they stumbled to 160 for 8. Tailenders Andy McBrine and Murtagh then kept cool heads as Ireland crossed the finish line with three overs left. It wasn't a comprehensive win, but Ireland would be pleased nonetheless with another victory under their belt. 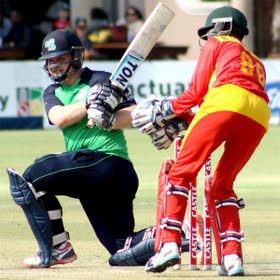 Unlike how it ended, Ireland began the chase in a comprehensive fashion as debutant Taurai Muzarabani was smashed for 18 runs in the first over of the innings. Most of the runs were scored by skipper William Porterfield, but Ireland's bright start was cut short by a brilliant catch in the covers by Sikandar Raza, leaping high in the air. A stunned Ireland slowed down, and the visitors were dealt a second big blow when Ed Joyce was caught in the deep as he attempted to break the shackles with a slog sweep. This was followed by a fighting 48-run stand between Paul Stirling and Andrew Balbirnie.

Just when it seemed like Ireland were getting their noses in front, Raza was back in action. After a good piece of fielding at midwicket, he plucked the ball and scored a direct hit as the batsmen went for a close run. Raza had only one stump to aim at but hit bullseye, and Balbirnie was run out for 24. Niall O'Brien also fell cheaply giving a catch in the covers. Stirling, thankfully carried on, and brought up a patient 50 off 90 balls before being dismissed by the short ball. Gary Wilson was caught smartly behind the wickets as the fielder ran from slip to leg slip, anticipating a sweep. Kevin O'Brien fell slog-sweeping. But, Murtagh held his nerve well.

Murtagh's confidence perhaps stemmed from his impressive bowling effort earlier in the day. Bowling with discipline, the seamer finished with four wickets to restrict Zimbabwe to under 200. Murtagh found good support from Craig Young, who bowled with brisk pace. The duo combined to take out the openers before the score reached double figures. Sean Williams and Brian Chari then added 49 runs for the third wicket. After Chari was bowled by McBrine for 17, Williams carried on and crossed his fifty. He picked up a knee niggle during his innings though and eventually fell giving a thin edge behind the stumps, off Stirling.

Zimbabwe hit back with another partnership worth 71 between Elton Chigumbura and Raza. The latter was in an aggressive mode and raced to a half-century. However, an ugly slow ended his innings on 51. Chigumbura also perished for 34 going for a big hit. The lower order went down without a fight as Zimbabwe finished with an unsatisfactory 187. At various stages of the Ireland chase, it seemed that the total may be enough, as no Ireland batsman barring Stirling was willing to occupy the crease. But, this was to be Murtagh's day, and he ensured Ireland got home, in the company of McBrine.