World Cup 2019: Bangladesh should fancy their chances against Sri Lanka

A fighting Bangladesh will take on an inconsistent Sri Lanka in game number 16 of World Cup 2019 at Bristol on Tuesday.

A fighting Bangladesh will take on an inconsistent Sri Lanka in game number 16 of World Cup 2019 at Bristol on Tuesday. Bangladesh, despite their best efforts, has gone down to New Zealand and England in their last two games. While Sri Lanka survived a scare against Afghanistan, they might be somewhat rusty with their match against Pakistan being abandoned due to rain.

On current form, one feels Bangladesh might have a slight edge on Sri Lanka. Although they have gone down in the last two matches, they have competed excellently. Remember, they also registered an impressive win against South Africa early in the tournament. Mashrafe Mortaza will be expecting that kind of professional effort from his side when they clash against their Asian neighbors.

Shakib Al Hasan has been an exceptional performer for Bangladesh in this World Cup. The move to send him up the order has definitely worked wonders. With two fifties and a hundred, Shakib has once again proved what great value he brings to the team. Bangladesh has a number of match-winners in the likes of Mushfiqur Rahim, Mahmudullah and left-arm pacer Mustafizur Rahman. We haven't even spoken about Tamim Iqbal. One feels though that the time has come for him to stand up and deliver. 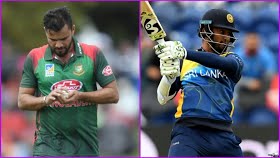 Sri Lanka has suffered in the tournament so far because their batsmen have just not been to scratch. Take out skipper Dimuth Karunaratne's bat-carrying fifty in the first match and Kusal Perera's impressive counter-attack against Afghanistan, Sri Lanka's batsmen have little to show for their efforts. The experienced Angelo Mathews will need to come into his own, so will the enterprising Kusal Mendis.

The Lankan bowlers were chiefly responsible for the team's fightback against Afghanistan. However, the hero of that game Nuwan Pradeep has been ruled out with a finger injury. There would thus be additional responsibility on Lasith Malinga to perform yet again. The slinger though will need support from the lesser-known blokes, without which his efforts could be in vain.