Australia visited India in 1998 amid much hope of clinching a series win that had eluded them for quite a few years. Their confidence stemmed from the fact that they a world-class batting outfit, and a competitive bowling unit led by Shane Warne.

Australia visited India in 1998 amid much hope of clinching a series win that had eluded them for quite a few years. Their confidence stemmed from the fact that they a world-class batting outfit, and a competitive bowling unit led by Shane Warne. Like so often in the 1990’s though India proved too difficult to dislodge at home as they clinched the series 2-1. The highlight of the three-Test series was the duel between two legends -- Sachin Tendulkar and Shane Warne. The Indian turned out to be the winner comprehensively as the leggie gracious accepted defeat.

1st Test at Chennai: A masterclass by Tendulkar 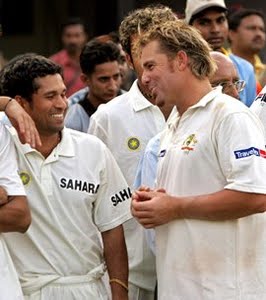 Not often had Warne been dominated in this manner. Tendulkar hit him against the spin, with the ball pitching in the rough, and succeeded in finding the boundaries time and again. The secret of his success was the excessive hardwork he put in in the nets, practicing similar strokes against domestic bowlers. His 155 in India’s second innings remains among the finest knocks played on Indian soil considering the conditions. Tendulkar had failed in the first innings, falling for 4, as India were bowled out for 257. His second innings masterclass however turned the tide in India’s favour as they clinched the game by 179 runs.

Navjot Sidhu came up with half-centuries in both innings while Anil Kumble ended with eight wickets for the match. Australia were bowled out for 328 in their first innings, and after India replied with 418 in their second, needed 348 runs to win the Test, but managed only 168. Tendulkar was declared man of the match for his brilliant century. The Test also marked the debuts of Gavin Robertson and Harvinder Singh.

It’s no secret that the Eden Gardens was Mohammad Azharuddin’s most cherished venue during his playing days. He continued his love affair in this series as well, stroking a magnificent unbeaten 163 as India replied strong to Australia’s first innings score of 233. Azhar’s stay at the crease lasted for 311 minutes during which he caressed those trademark flicks and drives, leaving even the Aussie bowlers mesmerised. Azhar’s genius apart, it was a game in which no Indian batsman failed. Sidhu and VVS Laxman contributed 90s, Dravid made 86, Tendulkar bludgeoned 79 while Ganguly scored 65. Even Mongia chipped in with an unbeaten 30.

Facing a tall mountain, Australia crumbed to 181 all-out in their second innings, handing the hosts a massive innings and 219-run win and, with it even the series. Kumble shone for India again with the ball, but it was Javagal Srinath was became the man of the match for his lion-hearted effort, whichproduced six scalps in the Test. Australia’s Paul Wilson was the only debutant in this match.

The series may have been lost, but Australia ensured that they ended the tough series on a high note. For a team that had been struggling to cope up with the conditions in India, the win in Bangalore was a drastic turnaround. Paceman Michael Kasporwicz was the surprise hero for the Aussies. His five-for in the second innings led to an unprecedented Indian collapse, following which Australia marched their way to victory courtesy Mark Taylor’s century.

Australia replied to India’s tall first innings score of 424, built around Tendulkar’s 177, making 400 – Mark Waugh starring with an unbeaten ton. Kasporwicz then worked his magic in the second innings as Australia never looked back from there. The Test saw three debutants in action –Adam Dale, Darren Lehmann and Harbhajan Singh.