Chennai Super Kings laboured to a 4-wicket win at the Eden Gardens despite chasing a mediocre target of 120 in 20 overs.

Chennai Super Kings laboured to a 4-wicket win at the Eden Gardens despite chasing a mediocre target of 120 in 20 overs. If not for a crucial cameo of 36* (from 14 balls with 3 fours and 3 sixes) from Sir Ravindra Jadeja, CSK could have easily lost the game! Michael Hussey almost spoilt the match for CSK consuming as many as 51 balls and scoring only 40 before falling at a crucial juncture of the game.

Jadeja played easily one of his best knocks and under pressure, it was perhaps the first time that he could deliver a win for his team with the bat. CSK needing only 120 to win started their innings very slowly and the experimentation of sending in R Ashwin to open the batting hardly yielded anything. With Hussey taking his own sweet time, the pressure was mounting on the other batsmen who succumbed to it and lost their wickets. When Skipper MS Dhoni got run out, CSK was heading towards a defeat at 54 for 5 in the 12th over. Hussey scratched around and got out in the 17th over leaving his team at 89 for 6 but Jadeja’s big hitting ensured that CSK wrapped up the match with five balls to spare. 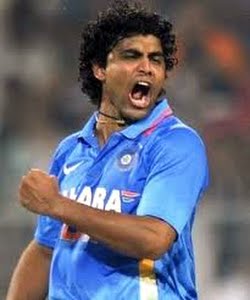 Earlier, it was a shocking batting display from the hosts KKR. All the batsmen seemed to be in a hurry and kept on playing their big shots irrespective of the match situation. From 47 for 1 in 6 overs, KKR collapsed in a heap to 119 for 9 in the allotted 20 overs. The two openers – Skipper Gambhir with a 19-ball 25 and Yusuf Pathan with a 22-ball 25 were the top scorers. For CSK, Jadeja took 3 for 20 and followed it up with a 14-ball 36* to get the Man of the Match award.

Toss and Teams: Hosts Kolkata Knight Riders have won the toss and elected to bat first against Chennai Super Kings at the Eden Gardens under overcast conditions.